Matthew Libatique, nominated for “Best Cinematography” for “Black Swan”, wore a black wool tuxedo with grey abaca fiber tie (abaca is a green plant indigenous to the Philippines). Mr. Libatique has served as cinematographer (director of photography) on many of Darren Aronofskyâ€™s films and has worked on director Jon Favreauâ€™s “Iron Man” and “Iron Man 2”. Mr. Libatique won “Best Cinematography” prize at the Independent Spirit Awards the night before the Oscars (he also won in 2001 for his work on Aronofskyâ€™s “Requiem For A Dream”). His upcoming film is “Wolverine”, also with Aronofsky. 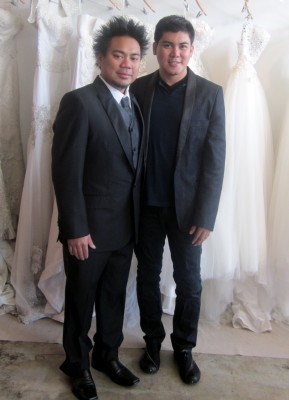 â€œMatty is a big deal in Hollywood and has earned a position of respect in his field over the past decade,â€ according to Oliver. â€œIt was an honor to dress a Filipino-American for one of the highest Oscar honors for which we have ever been nominated. I was flattered he chose to wear me. When I explained what abaca was and that, as a Filipino-American, it would be great for him to wear one of our native fabrics to the Oscars, I think he liked that. But at first I think he was a little hesitant when I told him I would make a tie out of a plant,â€ laughs Oliver. â€œBut when he saw the finished product, he liked it.â€

Oliver has made an effort to promote Philippine native fabrics around the world and most recently worked with the Fiber Industry Development Authority (FIDA) in Manila when he took the â€œEco Sustainable Fashion Awardâ€ in the Bahamas last October.

Gigi Dement, producer of â€œBest Live Action Shortâ€ film nominee “God of Love”, wore a one-shoulder, fully-beaded teal green and purple mermaid gown. Purple silk cascaded from the shoulder to ruffles along the neckline and matched with a narrow purple belt. Ms. Dement, a Filipino-American, was an attendee at the Oscars and witnessed the win for her 18-minute short film and its director Luke Matheny. For shorts, the director receives the Oscar.

As most who have been following Philippine press lately know, Oliver has been garnering lots of attention. Earlier this month, he dressed Grammy nominee Kelly Price for the 2011 Grammy awards. Ms. Price was nominated for â€œBest Female R&B Vocal Performanceâ€ for her just released track â€œTiredâ€ whose dance mix will be receiving a major push in clubs in April. Fantasia ended up wining the Grammy. 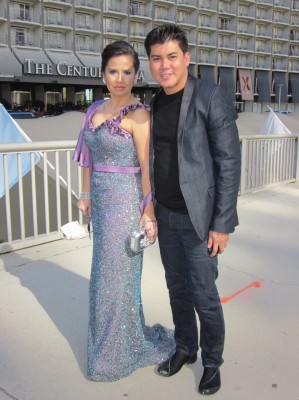 Recently, Anna Maria Perez de Tagle(â€œCamp Rock,â€ â€œHannah Montana,â€ â€œFameâ€) wore a piÃ±a cocktail dress to perform at the Ronald Reagan 100th Birthday Gala in front of Nancy Reagan, former VP Dick Cheney and hundreds of congressman. This was the first time anyone in that audience had seen piÃ±a fabric.

Other celebrities Oliver has dressed in the past few months include actresses AMBER RILEY (â€œGleeâ€) for the Golden Globes, EVA LA RUE (â€œCSI Miamiâ€) for a magazine cover, Aly Michalka (â€œHellcatsâ€) for a magazine cover, Sophia Bush (â€œOne Tree Hillâ€) for a Globes party, Jenna Ushkowitz (â€œGleeâ€) for a photo shoot, and celebrity Camille Grammer (â€œReal Housewives of Beverly Hillsâ€) for TV appearances. Just this week, the wife of the owner of Paul Mitchell wore Oliverâ€™s Bahamas-winning piÃ±a gown for the cover of an eco magazine.