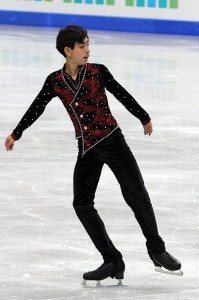 LOS ANGELES, Jan 29 (Mabuhay) – The lone Filipino athlete that will see action in the Winter Olympics capped his pre-Games preparation in Moscow at the Novogorsk Training Center in Khimki, a region 844 miles north of Sochi where the Winter Games will be held on February 7-23, 2014.

His name is Michael Christian Martinez, and his event is the men’s figure skating singles, one of the traditional centerpiece events in the Winter Olympic Games.

The men’s figure skating starts on Feb. 13, 17:00 pm onwards with competitors taking the ice with their short programs (SP).  Lots will be drawn for the skating order. Freeskates (FS) are scheduled on Feb. 14 .  Only the top 24 performers will advance to the freeskate.”

“I am confident that I will qualify in the freeskate or the final event.  I had enough training days in Moscow to polish my act,” Martinez told this writer. “Now, I am ready and my confidence level is high. Thanks to the great support from Filipinos all over the world.”

It was Victor Kudryavtsev, the Russian coach who mentored former Olympic champ Ilia Kulik, who took care of the final preparations for the Filipino’s Olympic stint.

Make the freeskate; that is the realistic goal for the Filipino star figure skater.  Should Martinez finish inside the top 20 in the Olympics that would be a great accomplishment in itself.  In his event, he will be competing against the best and the battle-tested skaters in the world in an arena where excellence and perfection are required norms.

ranked no. 29th figure skater in the world by the International Skating Union (http://www.isuresults.com/ws/ws/wsmen.htm) as of December 30, 2013, Martinez, who is widely regarded in the skating world as one of its future stars, booked his personal best of 67.01 (short program) at the world junior championship in February last year.  He finished a strong fifth in that competition.

In November last year during the ISU-Junior Grand Prix in Tallin, Estonia, Martinez scored 135.15 in the freeskate for a combined total of 198.82 en route to a third place finish. Both scores remain his personal bests going into the Games.

should those personal bests hold water in Sochi, Martinez could be somewhere in 18th-22nd places. the top favorites in the men’s figure skating singles – one of the centerpiece events in the Games – are three-time world champion Patrick Chan, Canada; Yuzuru Hanyu, Japan; Javier Fernandez, Spain; Dennis Ten of Kasakhstan, and ageless Evgeny Plushenko, the 2006 Olympic champion from Russia.

In an interview before he left California for Russia, Martinez told this writer that finishing in the top 24 is a realistic goal for him as he will be up against jaded and seasoned skaters, veteran athletes who have been into competitive skating for a long time.

“I am hoping to finish in the top 24 to qualify in the freeskate/final event.   i will be competing against older, veterans and more experienced skaters, some of them are former Olympians,” Martinez said.  “several of these skaters had been skating even before i was born, thus it’s a very, very tough competition.”

Martinez also pointed out that many of these skaters are doing quad jumps consistently, while others will attempt to do quads.  “In my case, my Russian coach decided not to put my quad since it’s not yet consistent and to avoid stress on my knees and to keep me injury-free until the Olympics,” he said.

With barely a week before the Games, Martinez’s mom who also acts as de facto coach told this writer that preparations, mindset, and the health of his son are upstanding.

“So far so good,” Martinez’s mom, Teresa told this writer. “We stay indoors as much as possible. We are not taking any chances for Michael as he might get sick, especially that he is asthmatic. It is good that the training center is just beside the hotel. The temperature here dips as low as -11 Celsius.”

Martinez is the first homegrown Filipino athlete to see action in the Winter Olympics. A tropical country, the Philippines is not expected to have winter sports athletes. In fact, the Philippines does not have a National Sports Association that handles winter game sports. Regardless, four athletes represented the Philippines in the 1972, 1988, and 1992 Winter Games, but they were second, third generation Filipino expats who grew up or lived outside the country.

The Philippines’s 1972 bets Juan Cipriano and Ben Nanasca did not finish their slalom events in alpine skiing. At the 1988 Games in Calgary, Alberta, Raymund Ocampo, a Fil-Am luger, finished way off the leaders, while Michae Teruel, also an alpine skier, carried the PH tricolor at the 1992 Winter Olympics in Albertville, France. This Olympic year, yet another Fil-Am skater Christopher Caluza, vied for an Olympic slot to represent the Philippines, but he finished dead last at 34th in Skate Canada qualifier. Martinez, on the other hand, booked his Olympic ticket via the Nebelhorn Skateoff at 7th place. Among skaters seeking Olympic slots, the Filipino was third as the top four were in the skateoff just for trophies.

In the case of Martinez, he was born and raised in Metro Manila, a place where people think an ice rink is a kind of popsicle, a triple axel an item inside the tool box, and figure skating as mere recreational sports. Martinez’s phenomenal skills notwithstanding, the boy soon found out that the greater odd to contend with in the sports that he loves is the cost of training expense to raise his game to the next level and eventually become a world beater. People who understand figure skating agree that with a talent like Martinez, the possibilities are limitless. In young Martinez, we could be looking at a very unlikely hero who can deliver PH’s quest for the elusive Olympic gold. But the Philippine sports establishment, which is populated by bureaucrats that are essentially politicos, are not quite responsive to the idea of raising up a real Filipino athlete who can bring home a gold medal.

Meanwhile, like the real life-inspired movie “Cool Runnings” where the Jamaican bobsled team had to raise funds doing arm-wrestling, singing on the street, and holding a kissing booth, Martinez and his supporters in Los Angeles continue to raise additional training funds dancing the zumba. (MNS)

(David Casuco writes sports and spirituality for examiner.com and Mabuhay News Service. He obtained his journalism degree from the University of Santo Tomas and took expanded theological studies at the Angelus Bible Institute in Los Angeles.)

A chink in Pacman’s armor?