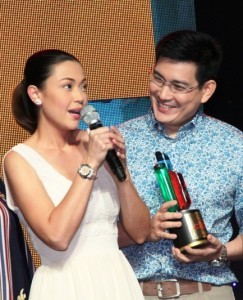 Jodi Sta Maria and Richard Yap receive awards for “Be Careful With My Heart” at the 9th USTv Students Choice Awards of University of Santo Tomas, Asia’s oldest existing university.

The magic of Maya (Jodi Sta. Maria) and Sir Chief (Richard Yap) has struck the entire nation again as “Be Careful With My Heart” recently did not only dominate the ratings game but ruled the trending topics list of the popular microblogging site Twitter

Based on the latest data from Kantar Media last Tuesday (March 12), ABS-CBN’s no.1 kilig-serye garnered 26.4% national TV ratings or 13 points higher than the 13.4% of its rival program in GMA “Eat Bulaga.”

Meanwhile, the whole cast of “Be Careful With My Heart,” led by Jodi and Richard, recently received the loudest cheer from the audiences in both 11th Gawad Tanglaw and 9th USTv Students Choice Awards.

Don’t miss “Be Careful With My Heart” only on TFC worldwide. For more on the show, visit TFC.tv. (ABS-CBN Corp Comm)