Filipinos in Midwest Brace Themselves for Sandy

WASHINGTON, D.C.—As Filipinos in the storm-ravaged East Coast of the United States begin the long process of recovery, it is now the turn of their kababayans in the Midwest to brace themselves for the passage of one of the most violent storms in American history.

In a statement, the Philippine Embassy said it continues to monitor superstorm Sandy as its passage across the Midwest is expected to bring heavy rains and strong winds that could affect another 50,000 Filipinos.

Ambassador Jose L. Cuisia Jr. said the Philippine Consulate General in Chicago is in touch with Filipino Community leaders in Michigan, Ohio and Indiana who were urged to ensure that their members steer themselves clear of the storm that has left in its wake more than 50 persons dead and billions of dollar in damage.

Ambassador Cuisia said Consul General Leo Herrera-Lim has advised the Filipino Community in the Great Lakes region to stay indoors and avoid coastal areas due to threats posed by waves that could go as high as 20 feet. 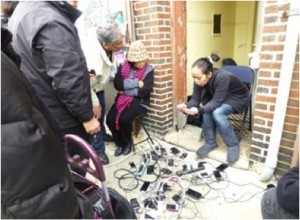 BAYANIHAN.
The home of a Filipino family, one of a few that still has electricity in storm-ravaged Jersey City in New Jersey, serves as a charging station for the mobile devices of other Filipinos in the area. Consul General Mario De Leon Jr. of the Philippine Consulate General in New York said Filipinos have been helping each other cope with the aftermath of superstorm Sandy which caused damage to the homes and properties of countless Filipinos in New York, New Jersey and Connecticut. (Photo by Philippine Consulate General New York)

Consul General Herrera-Lim said the effects of the storm are now being felt in the area and that all cargo shipping activity in Lake Michigan has come to a standstill. He said there are already reports of floods in Cleveland, Ohio.

In the East Coast, Ambassador Cuisia said the Philippine Embassy in Washington and the Consulate General in New York continue to receive updates on the condition of Filipinos in areas that were hit hard by the storm.

“We continue to receive reports of Filipinos affected by floodwaters and power outages,” Ambassador Cuisia said. “Fortunately, there are no reports of any Filipino casualties and we hope it remains that way.”

Consul General Mario De Leon, meanwhile, reported that the situation in New York and in New Jersey has started to normalize but many Filipinos are still without electricity and could not be contacted because of downed communication lines.

On Wednesday, Consul General De Leon visited affected Filipino neighborhoods in Jersey City, one of the hardest hit areas in New Jersey. He was accompanied by Councilman Rolando Lavarro who showed the damage caused by waist-deep floodwaters to homes and vehicles in Country Village where an estimated 2,000 Filipinos reside.

FILIPINO STORE.
Filipinos line up for food supplies and other necessities at the Philippine Farm in Jersey City, one of a few establishments there that is powered by a generator. Consul General Mario De Leon Jr. of the Philippine Consulate General in New York said hundreds of Filipinos remain without electricity following the havoc wreaked by superstorm Sandy in New Jersey and other areas in the eastern seaboard of the United States. (Photo by Philippine Consulate General New York)

Consul General De Leon said the consulate has received reports from Filipino Community leaders that the homes of some of the estimated 20,000 Filipinos in the South Jersey and Cherry Hills areas sustained some damage from the storm.

Additional reports received by the consulate also indicate more damage to the homes, property and vehicles of Filipinos in Suffolk County in Long Island—one of the hardest hit areas in New York that was swept by floodwaters on Tuesday. At least two Filipino families were also reported to have completely lost their homes in Staten Island, which was also hard-hit by the storm.

Consul General De Leon, at the same time, called on the members of the Filipino Community to reach out to each other in the spirit of bayanihan to help them cope in the aftermath of the disaster.

“We would like to call on the innate concern of Filipinos for their kapitbahay or kababayan and help each other in making it through this ordeal,” Consul General De Leon said.

According to him, Filipinos can help by checking on the conditions of not only their fellow Filipinos but also others by sharing food, water and other necessities to help alleviate their immediate concerns.

“We should share power sources in our homes if we have electricity so that those in dire need can charge their mobile devices and allow them to communicate with relatives and friends here in the US and in the Philippines,” he said.

Consul General De Leon added that a charging station is available at the Philippine Center on Fifth Avenue for Filipinos to use from 9 a.m. to 5 p.m. starting Wednesday and until the situation normalizes.

He urged community members to inform the Consulate General of their concerns so that this could be relayed to authorities for appropriate assistance. ###