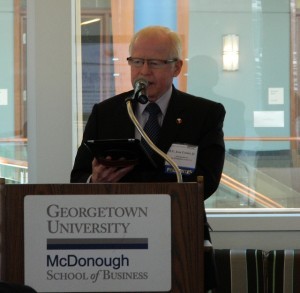 WASHINGTON, D.C. — The Philippine Embassy is urging Filipinos in the United States to help sustain the economic transformation taking place in the Philippines by registering as overseas voters and participating in the presidential elections in 2016.

Ambassador Jose L. Cuisia, Jr. issued the call as the Embassy and other Philippine Foreign Service Posts in the US and around the world began the registration of new voters last week.

“I urge our kababayans to exercise their right to vote by registering as overseas voters at the Embassy or the nearest Consulate,” Ambassador Cuisia said.

“The Philippines has made great economic gains over the past few years and it is our responsibility not only to ourselves but also our children to help preserve those gains by choosing the right leader for the country,” Ambassador Cuisia added.

Among the first to register at the Embassy was Ray Gonzales, originally from Pampanga but now residing in Washington’s Georgetown district. For Gonzales, registering to vote means ensuring that the candidate with best intentions for the country gets elected into office.

“I want to register and participate in the coming elections so that my vote can help the right candidate win. I hope that the winning candidates can give better opportunities for my fellow Filipinos in the Philippines,” said Gonzales.

Minister and Consul Emil Fernandez, who heads the Embassy’s voters registration team, said the registration period was seamless and took only a few minutes, including the capturing of the registrant’s biometrics and photo.

Consul Fernadez urged Filipinos in the United States to register so they could vote in the 2016 national and local elections. The registration period is from 6 May 2014 until 31 October 2015 at the Philippine Embassy or Consulate having jurisdiction over where the overseas voter resides. Registrants are required to present an original Philippine passport.

The 30-day voting period will commence on 9 April 2016 Philippine time.