A contingent of Filipino workers, particularly belonging to the Pilipino Workers Center (PWC), joined fellow laborers on Wednesday (April 28) in celebrating the 50th Workers’ Memorial Day and in honoring workers who recently died from COVID 19.

The memorial, organized by the Southern California Coalition for Occupational Safety and Health, was held outside the Los Angeles City Hall. It was attended by caregivers, domestic workers and other laborers involved in the service sectors.

Aliya Plaza, who spoke for the PWC delegation, expressed her grief for fellow workers (some of them members of the PWC) who recently met their untimely death.

Bagyo was a devoted supporter of the PWC. He did not only performed for the group during events but also participated in its activities, among them; driving the PWC’s famous “jeepney” around Filipinotown for visitors and young Filipino Americans.

Plaza said that the deaths of her fellow workers should not go in vain but should inspire others to fight for better wages and working conditions.

One of the speakers, domestic worker Andrea Lopez, narrated to the crowd her own experiences in the past and in the recent days as the pandemic hardly hit her sector.

Lopez revealed how she was exposed to the virus by an insensible client who did not disclose to her that he had a COVID 19 infection when he asked her to clean his house.

The domestic worker told the crowd how she feared her life and the lives of her children when she found out the truth.

Lopez also had a miscarriage some time ago in another unfortunate episode in her life as a domestic worker.

One of the main speakers, Rev. Jennifer Gutierrez, told her audience that people should stop believing that the recent deaths of their fellow workers as mere circumstances of them being on “their time to go.” She explained that those deaths were not only unfortunate but preventable as well.

Simultaneously, California Governor Gavin Newsom has issued a proclamation declaring April 28, 2021 as “Workers’ Memorial Day” in the State of California.

In the proclamation, Newsom acknowledged the workers’ contributions to the growth of the fifth largest economy in the world and said the government of California is committed to securing safe and healthy working conditions for everyone. 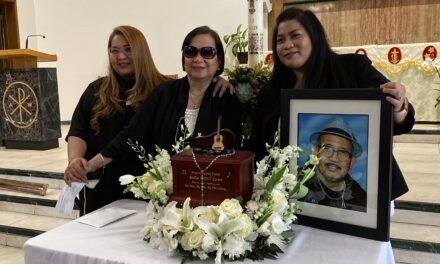 COVID 19 takes away the “leader of the band”