Filipinos want a leader who will listen to them — survey 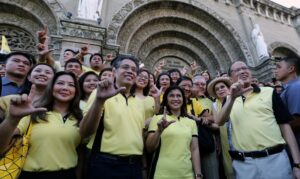 President Benigno S. Aquino III with Liberal Party (LP) standard bearers Mar Roxas and Leni Robredo are greeted by supporters outside the Manila Cathedral as they walk to Commission on Election building to file their Certificate of Candidacy, Thursday, (October 15). Tomorrow, Friday, (October 16) is the deadline of filing of candidacy for the 2016 elections. (MNS photo)

MANILA (Mabuhay) — In the 2016 elections, Filipinos will most likely be looking for a leader who will listen to them, based on the 4th Philippine Trust Index released Thursday.

The nationwide survey conducted from July to August 2015 among 1,620 respondents showed that willingness to listen to people’s feedback and opinions on important issues in the country is the most valued quality a government leader must have.

The public also thinks that a government leader must have strong political will, show genuine concern for people’s welfare, and stay true to his or her campaign promises, the poll results showed.

She said the public does not give much value to government leaders’ participation in social activities of sectors and communities such as anniversary celebrations, sports tournaments, and fiestas.

Molina added it was the first time PTI included the Filipino peoples’ perceptions of an engaging leader in both the public and private sectors to understand the leadership qualities most valued by the people.

“This is to make PTI a tool for voter education,” said Molina.

Junie del Mundo, CEO and Chairman of EON The Stakeholder Relations Group, in a press statement, said the findings on the most valued leadership qualities further underlines the importance of conversation and communication in building trust for public and private institutions.

“The findings are very much aligned with the key insight from last year’s PTI, where an overwhelming majority of the respondents said it is ‘very important’ for Government, Businesses, NGOs, and the Media to communicate to its stakeholders,” he said.

“Dialogue and listening to stakeholders should be the new framework for institutions, especially leaders of institutions, to build reputation and earn trust,” Del Mundo added.

Similar to the government leaders, the survey showed that the most valued quality of a business leader is their willingness to listen to employees’ feedback, followed by “genuine concern for employees.”

However, similar as well to the results of government, only two out of ten Filipinos agree that company executives today are receptive to employees’ feedback and are genuinely concerned for their people. (MNS)