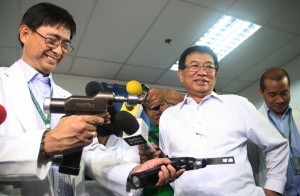 MANILA  (Mabuhay) – The Department of Health (DOH) on Thursday reported the number of firecracker-related injuries currently has 77 cases, or 34 percent lower compared to the same period last year.

In a briefing at the Jose R. Reyes Memorial Medical Center (JRRMMC), Health Secretary Dr. Enrique Ona said this number was 39 cases lower compared to the 116 cases recorded in the same period in 2012.

“I’m happy to report that as of 6:00 a.m., compared to the same period last year, there is a significant decreasein firecracker-related injuries by 34 percent,” Ona said.

Ona noted that 34 percent of the children below 10-years-old were only passive observers rather than active users of firecrackers.

Out of the 77 firecracker-related injuries, 72 were actual firecracker injuries; four were due to stray-bullets and one due to ingestion of a “pop-up” type firecracker.

From the 72 cases, 62 of them were males aged two to 65-years-old, 18 cases were children less than 10-years-old, 66 sustained blast injuries not requiring amputation and seven eye injuries.

Data from the DOH also showed that 33 cases (46 pct) of the recorded injuries were from the National Capital Region (NCR) while nine were from Region 6 and seven cases each from Regions 1 and 4A.

Meanwhile, no cases of firecracker-injuries were recorded in 4-B, 8, 9 and Administrative Region of Muslim Mindanao (ARMM).

Ona again warned the public, especially parents, to prevent their children from using firecrackers, and watch fireworks displays instead.

“There should be no more injuries due to firecrackers,” Ona said in Filipino. “We should maintain the number of firecracker-related injuries we have now and not add to them.”

He said that even before the Philippine National Police (PNP) imposes a ban on firecrackers, the public should also be responsible enough to prevent injuries from happening.

“While you are celebrating and enjoying the holiday, especially on New year’s Eve, don’t forget that accidents can always happen,” he said. “We hope during the New Year we won’t be seeing you in emergency rooms.” (MNS)