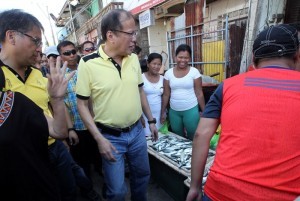 President Benigno S. Aquino III, together with some of his cabinet secretaries inspects wet markets in Leyte on Monday (November 18) to check on the prices of commodities. The president has been going around Leyte and Samar to inspect and give support to the victims. (MNS photo)

BAYBAY  (AFP) – A crucifix crudely fashioned from broken twigs marks a shallow grave on the beach in Baybay, a once-lively Philippines fishing village where generations saw the sea as a source of bounty until it cruelly turned against them.

“I have never been afraid of the sea but the day Yolanda came, I cried,” said Cesar Magdua. Driven ashore by Super Typhoon Haiyan – known locally as Yolanda – the ocean engulfed the villagers’ homes and took their livelihoods with it.

The 54-year-old is a devout Catholic with a leathery face and a deep brown tan whose father taught him to fish as a young boy.

“There was no time to secure all our boats and take them inland, and the waves came crashing so fast, taking everything away,” he said, pointing to a coconut tree whose top was snapped by the force of the water.

“The saying is true, the sea takes what it gives.”

Haiyan’s furious winds stirred 20-foot (seven-metre) high waves that rushed inland on November 8, destroying almost everything before them, including 1,500 homes in the tightly-knit community along with all their nets and boats.

Magdua could not say how many had been killed in their village. Days after the storm, bodies were still being recovered all over the area.

Around 4,000 people are known to have died nationally, according to official figures, but Magdua believes “many, many more” could be dead.

“I have not seen many of my friends. If you get caught in waves that high, you die,” the father-of-eight said.

Magdua said he had evacuated his family to a friend’s two-story home a kilometer (two-thirds of a mile) from the shore. He was securing his seafront shack with ropes and sand bags when the first wave came.

He clung on to a rope and buoy, and tumbled through the water until he washed up somewhere.

“But the problem now is, how do we survive? We cannot rely on dole outs forever,” he said, as he and other fishermen inspected the destroyed village council building.

Just down the narrow path, village councilor Nonelon Wenceslao led some of the menfolk in slaughtering a pig they had found, attracting a small crowd who all wanted some of the meat.

A tattered Philippine flag fluttered in the wind, behind a big wooden board on which someone had daubed: “Help. We need food, water.”

Children waved at a passing military helicopter carrying relief goods, while others played on a pile of broken cement flooring that was once a popular local seafood restaurant with the now-sardonic name of Yolanda’s Eatery.

Wenceslao said he and other officials had yet to fully account for the village’s 1,500 families in the chaos of the storm’s aftermath.

Only a few bodies had been found on the beach, he said, although many were seen carried away by the high water. Few believe the missing are alive.

“We were not rich, but we were happy and had everything,” Wenceslao sad. “Now, nothing is left. Our boats are gone. How can we start rebuilding when we don’t have the means to survive?”

Fishing has for generations been the backbone of the community, and an average fisherman earns between 500 and 800 pesos (12-20 dollars) a day—not a lot, but enough to eke out a living.

City folk and tourists who visit the area brought other income, he said.

“We are appealing to the government for help. Please help us build boats,” Wenceslao said, adding that the few fishermen who have savings cannot get at their money because the banks are closed.

Marjohn Mugas, 23, however, cannot wait for help. Aid was slow arriving and his wife and two children have had nothing much to eat in the week since Haiyan destroyed their home.

Mugas gathered up his broken nets and dragged them through some shallow water, catching a milk fish and small snails.

“This fresh water fish is most likely from fish ponds that were destroyed during the storm. This is good for today,” he said, smiling. “Tomorrow is another day.”