On a balmy Wednesday night, this author was privileged to have been invited by a  friend Linda Mapes, to the “Retro” performance of five delightful singing divas such as: Lirio Vital, Ivy Violan, Djoanna Garcia, Bambi Lopez and Maricar Cabasag at the famous Catalina Bar & Grill in Hollywood  Collectively, the five of them co-produced the nostalgic show which all brought us “down memory lane.”

Accompanied by the 4700 Band, its musical director, Myke Gonzaga happened to have worked closely with Linda Mapes at the then Pinoy ‘hangout”, the Bayanihan Restaurant on Beverly Boulevard during the mid-80’s. The other band members were: Edd Evidente on Bass, Yong Nacosa on Keyboard and Rolly Quizon on Drums.

Nothing could have been more apropos for an opening number but a 60’s R & B Medley and their group song of “What You Won’t Do For Love,” followed by Bambi Lopez’ rendition of Helen Reddy’s “You and Me Against the World,” plus their collective song of “She’s ‘Got It, Baby She’s Got It,” meaning…they all STILL have what it takes to entertain us all! 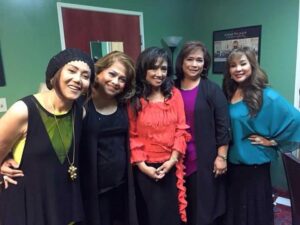 As I recall during the Bayanihan days in the mid-80’s, Maricar Cabasag and her band were the mainstays on weekend nights, and I wasn’t surprised at all to hear and see her sing again, particularly with her rendition of “Touch Me In The Morning.”

Though I never knew Lirio Vital because I was already here in the US at the height of her singing career during the mid-70’s I also learned that she too, moved to Texas after she ‘got married to Robert Arredondo, Jr. in 1990 after her almost 20 year stint as a guest artist in Armida Siguion-Reyna’s weekly TV show, “Aawitan Kita..”Her rendition of “One Night Only,” brought the crowd to a sing-along and dancing mode.

This author first met record singer Ivy Violan while we were judging a singing contest in the Cerritos area three years ago. Apparently, she finally decided to move here in Los Angeles to be with her family. Her singing career started when she was barely four years old, taught by her grandmother and started singing with a band called “Ivy and the Velboys.” The group’s popularity went on garnering them performances in numerous TV and radio shows, but in the 70’s her singing career flourished by joining other bands until she became a solo artist in 1980 and formed her own band called 8th of September under the Viva Records label.

Ivy and Maricar performed the high-energy duet renditions of the 60’s song “ I’m ‘Gonna Make You Love Me,” and the 70’s medley ‘On The Radio.”

Around the late 80’s when this author’s friend, Dindo Reyes was producing “Miss Asia USA,” I recalled having met the youthful and lovely Djoanna Garcia and was surprised to know that she’s back here in Los Angeles. This time, she showed us her Broadway-singing voice to the tunes of “What’s It All About, Alfie,” a song that brought so many memories of our college days, when a fraternity brother named “Alfie,” was constantly teased for being madly “in love” with a sorority sister. She also sang the melancholy song of “If You Could Read My Mind,” which was another nostalgic song of our youth.

Other memorable duet songs were: “If This World Were Mine” and “I Will Survive,” sang by Bambi and Djoanna;  “Last Dance” by Lirio and Maricar. Together, they all sang yesterday’s songs such as: “Funkytown,” ‘Can’t You See Just What You’re Doing To Me” and “Dirty Old Man.”

Their finale song was riveting to say the least, by collectively singing “’Ain’t No Mountain High Enough” so the crowd requested an encore and of course they obliged, to the tune of “That’s What Friends Are For,” thus ending a memorable retro night for all of us.