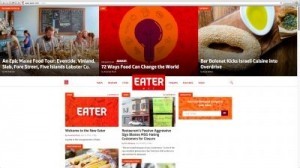 The new Eater.com
©All Rights Reserved/eater.com

This week the US food blog that’s been keeping tabs on the industry since 2005 and has garnered a loyal following of chefs and foodies alike, unveiled its redesign which at first glance is less text-heavy than its previous incarnation.

The new site also encourages readers to weigh in on some of the most controversial and interesting subjects in the food world with an online discussion forum.

The new Eater.com is poised to fill a vacuum left by the demise of gourmet online food magazine Gilt Taste, which launched to much fanfare three years ago, and strengthen its position as a go-to reference for industry gossip and authoritative food journalism.

While “Saveur,” “Food & Wine” and “Bon Appetit” magazines are national publications, Eater’s advantage is its hyperlocal focus as the site has breakout sections for 24 cities across North America.

Grace Poe to revisit ‘highlights of fraud’ in 2004 polls

Thrill of a lifetime: Soaring high above LA for the holidays