ROME, February 4, 2011 (AFP) – United Nations food agencies on Friday warned that record-high prices for basic commodities are helping generate unrest around the world and contributed to the ousting of the Tunisian president last month.

“Not only is there a risk, but there have already been riots in some parts of the world because of rising prices,” Jacques Diouf, head of the UN’s Rome-based Food and Agriculture Organization (FAO), told reporters. 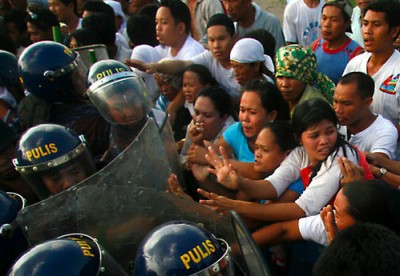 “Some governments have found themselves in difficult situations and there is even one that has fallen,” he said — a reference to the toppling of Tunisia’s veteran ruler Zine El Abidine Ben Ali in a popular revolt on January 14.

The FAO on Thursday said food prices have reached their highest level since the UN agency began measuring them in 1990.

The FAO’s index of monthly variations for a variety of staples rose 3.4 percent from December 2010 to reach 231 points.

The World Food Programme, another UN agency, said: “The events unfolding across the Middle East these past few weeks serve as a warning to us all about the important role that food security plays in calming public anger.”

“Across the region, we have seen civil protests driven by a complex array of different factors but all sharing one thing in common — growing anxiety about rising food prices and concern about access to food,” it said in a statement.

Prices add “stress to the carefully calibrated systems in place to bring enough food into countries to feed hungry populations, and to provide the subsidies that ensure it is sold at prices that are accessible to the poor.”

France, which has promised to stamp out food price volatility as the current head of the G20 group of leading world economies, warned of “hunger riots”.

“There is a real risk of hunger riots,” French Agriculture Minister Bruno Le Maire said at a joint press conference with Diouf.

Le Maire called for “structural measures” to avoid spikes in food prices, including greater transparency over production and stocks.

He said that G20 countries should agree on a system of food stocks that can be released for parts of the world that are most at risk.

“Speculation on hunger in the world is economically dangerous and morally unacceptable,” he said, referring to widespread criticism from campaigners of the role played by financial speculators on global commodity markets.

A previous sharp rise in food prices in 2007 and 2008 triggered food riots in a number of African countries, as well as in Haiti and the Philippines.