For Ben Roethlisberger, winning does not equate to redemption

CHICAGO – The Super Bowl’s story machinery can be overwhelming. Small issues become large, major stories become gargantuan. It’s part of what makes the game and the weeks leading up to it great, and not so great.

This year there is no shortage of good tales to tell as Pittsburgh and Green Bay prepare to play on the biggest sports night of the year. Two of the most aggressive and creative defensive coordinators match wits. Historic teams, founded in 1921 and 1933, play each other for the first time in this game. All will be dissected, as will running games, passing games and the story of the backup defensive back who was raised by wolves in the back garden of a London row house. That one always brings out the soft music on TV. 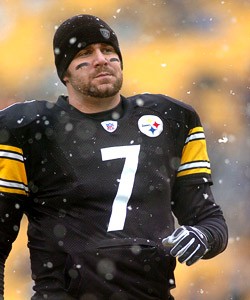 One story that also will be told over and over again is the one of Steelers quarterback Ben Roethlisberger. Already ESPN has used the word “redemption” to refer to Roethlisberger.

Winning a game and playing a football season do not equate to redemption. That equates to competing and winning. Redemption, rehabilitation of an image, whatever phrase you wish to choose … that takes place over time in the way a person lives his life, not in the way he runs or passes.

Ray Lewis went through this kind of thing a few years back. Lewis was accused in a double murder following a Super Bowl in Atlanta, then accepted a plea bargain when the main prosecution witness’ testimony was weak. The following Super Bowl, Lewis and the Baltimore Ravens won, and Lewis was named MVP. He talked about all the adversity he’d faced – even though the real people facing adversity were the families of the murder victims.

Roethlisberger was investigated in the spring for a sexual assault, otherwise known as rape. The investigation followed a night of revelry for Roethlisberger on his birthday, when he and his entourage descended on a small college town in Georgia. Drinks were bought, strange things happened and a 20-year-old told police she had been assaulted by the Steelers’ quarterback.

Prosecutors did not charge Roethlisberger because there was not enough evidence to prosecute the crime. But the District Attorney’s haunting words from that investigation linger: We do not prosecute morals. We prosecute crimes.

Be fair to Roethlisberger. He has made every attempt to change his course since the investigation. The Steelers gave him another chance, and he has tried to take advantage of it. He’s been more cooperative with the media, better with teammates and more honest and friendly with his answers to questions. He’s also avoided off-field incidents.

That is all well and good. And Roethlisberger should be commended for his efforts. He is doing what he can do, and the point is not to demean a guy trying to do right. Perhaps this moment in his life will be a touchstone for him, a turning point.

But in the long run, it does not equal redemption. Redemption comes not in the winning of games or in answering media questions nicely. He’s supposed to do that stuff. He’s paid to play and win. And whether it’s a quarterback or the dopey neighbor down the street who keeps leaving the garbage can out or the co-worker, we really only expect people to be kind and patient, don’t we?

Roethlisberger’s redemption will come not in winning the Super Bowl either. He wins, he’s got a ring. But who cares if he has a ring if he goes back down the same road in the offseason. That’s when redemption will come – in the way he lives his life and the example he sets for others, especially for the kids who look up to him. What happened in that bar in Milledgeville was an example of what not to do. Same with that civil suit filed against Roethlisberger in Las Vegas. Same with all the stories that came out about how rude he had been to people in Pittsburgh.

Those incidents are in the past, yes, and Roethlisberger is doing what he can now to change things. Bully for him. It’s what anyone likes to see. It’s just that the story is not completely written. Roethlisberger has an offseason ahead of him, and another, and another. Many athletes find their comfort zones during the season, when their life is structured and they have the cocoon of the team.

The offseason they are suddenly turned loose, and if they are to find trouble it’s that time when it might happen. It’s why every college and pro coach holds his breath during bye weeks – because that’s when the chances of a guy getting in trouble increase.
To state or focus on this redemption thing because Roethlisberger won games borders on the absurd.

To state or focus on this redemption thing because Roethlisberger won games borders on the absurd. If Roethlisberger acted the exact same way and did all the good things he’s been doing but lost, would his efforts mean less? Hardly. But to put a microscope on them because he’s won is just as silly.

Too, it forgets the most important person in the Milledgeville incident, and that was not the Steelers’ quarterback. That would be the girl who has to live with what happened. Her story is the one of true redemption. She is back in school. If she is able to resume her life, she is showing a lot more courage than a guy who avoided prosecution after some shady happenings down a hallway in the back of a bar, a guy who is in the public eye because he can pass and run and wear shoulder pads.

Roethlisberger is playing a game in 13 days that will decide an NFL champion. He competes, he wins, or he loses. That is the story. To say it’s anything bigger is to state a falsehood.

At game’s end in Pittsburgh Sunday, Roethlisberger took a knee on the field, a towel covering his head. It was, as they say, a classic “emotional moment.”

Roethlisberger said he was praying at that moment. And he may well have been. Good for him if he was. He won and he deserved to enjoy the moment in whatever way he wished.

It would be nice, though, to think that he paused for a second while on that knee to say a prayer for that girl in Milledgeville as well.