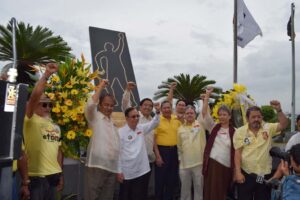 Airport General Manager Jose Angel Honrado with Members Of The August 21 Movement pose for the media during the wreath-laying ceremony at the Ninoy Aquino memorial marker at NAIA Terminal 1 to commemorate the 32nd death anniversary of Senator Ninoy Aquino.(MNS photo)

MANILA (Mabuhay) — For greater public accountability and absolute transparency in government, the constitutional bodies of the Sandiganbayan, the Office of the Ombudsman, and the Commission on Audit (COA) will get increased funding in the proposed General Appropriations Act of 2016, Pasig Rep. Roman Romulo said.

“We have very high hopes that these incremental investments in the Ombudsman, Sandiganbayan, and COA will help suppress malfeasance and generate new savings for taxpayers,” Romulo said in a news release Friday.

“The struggle for reforms is never done, because the temptation to commit fraud and abuse is always there. This is why we have to invest constantly in fighting corruption and promoting clean governance,” Romulo said, noting that this is the best way to pay tribute to the martyrdom of Sen. Benigno “Ninoy” Aquino Jr. on his death anniversary.

The budget increase of the Ombudsman, “which receives around 10,600 new complaints every year, (should enable it) to aggressively investigate and prosecute officials accused of graft and corruption,” Romulo said.

On the other hand, “the fresh funding (at the Sandiganbayan) will cover the creation of two new divisions of the special anti-graft court and speed up the resolution of cases filed by the Ombudsman,” Romulo said.

The Sandiganbayan hears and decides criminal and civil cases involving graft and corrupt practices and other offenses committed by public officers and employees, including those in state-owned corporations.

Meanwhile, COA can use the increase to build up its audit services by hiring additional staff and adopting new technologies.

Romulo is author of a bill that seeks to compel all government officials and employees to settle their cash advances within specific deadlines, or risk criminal prosecution for embezzlement of public funds.

House Bill 1287 provides that the failure to settle a cash advance would be sufficient evidence that the recipient pocketed the money, unless the proof is rebutted.

This means the Ombudsman may already initiate a criminal charge for malversation of public funds.

Depending on the amount involved, “malversation of public funds” carries the maximum penalty of life imprisonment and perpetual disqualification from public office, plus a fine equal to the sum misused.

Under Romulo’s bill, cash advances in all government offices have to be liquidated within the following prescribed deadlines:

For salaries and wages — within five days after each 15th day of the month pay period
For petty operating expenses and field operating expenses — within 20 days after the end of the year
For special operations, and operating expenses or purchases of supplies, materials and the like in the amount exceeding P100,000 — within 20 days after completion of the operation or delivery and acceptance of supplies, materials and the like
For local travel — within five days upon the officer’s return to official station
For foreign travel — within 60 days upon return to official station
For other advances — within six months after performance of the purpose for which the advance had been granted
Based on a COA circular, a cash advance is settled either by returning the money if unspent, or by presenting vouchers, with details as to the items thereon paid, which must be in accord with the purpose for which the money was released, and further backed by proper receipts and other evidence of payment, subject to the result of a post-examination by the auditor concerned. (MNS)