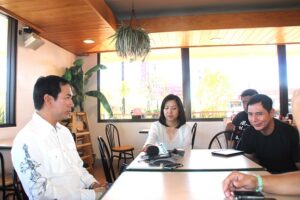 Part of the administration anti-corruption drive, according to the energy secretary Carlos Jericho Petilla, was President Aquino’s efforts to put the right people on key government posts. Petilla said this during a news conference with the members of the Fil-Am media in Los Angeles.

An hour or two before President Benigno Aquino III could deliver his sixth and last State of the Nation Address (SONA) on Monday (Philippine time), his former energy secretary Carlos Jericho Petilla spoke to the media here in Los Angeles and credited his former boss for cutting down corruption in the government.

“I could vouch for (him) on that,” Petilla said, adding that the proof of the success of President Aquino’s anti-corruption drive can be seen in the budget that the government was able to generate.

“The numbers that we have is 3 trillion and then you have money for armaments. Yan ang mahirap badyetan eh, defense. Without sacrificing DepEd (Department of Education). Baka naman wala nang matira for DepEd. And of course, debt servicing,” Petilla explained.

Part of the administration anti-corruption drive, according to the energy secretary, was President Aquino’s efforts to put the right people on key government posts. Although, he clarified that while not every choice of the president was perfect, they were generally well thought of.

These appointees, Petilla said, were mostly drawn from the private sector and were people “who do not need jobs” and instead “sacrificed” to join the government and serve the people.

“We don’t need the government to survive,” Petilla added, implying that he was one those people picked by President Aquino to head a government position because of perceived proficiency and integrity.

The former energy chief also said that the anti-corruption campaign of the Aquino administration should be credited for regaining the trust of investors which consequently resulted in a healthy economy. “Pag walang investors confidence, walang mangyayari sa atin,” Petilla stressed.

President Aquino, according to Petilla, should also be credited for having the political will to implement or push policies that were deemed to be unpopular.

Petilla did not specifically cite any of those unpopular policies pushed by President Aquino but among them were the Reproductive Health Act of 2012 and the Basic Bangsamoro Law which still pending in Congress.

Lastly, Petilla said President Aquino’s legacies would also include the ability to keep a big margin of people behind the causes being espoused by his administration.

While it has been routine for presidents to gradually lose their popularity as their terms progressed, Petilla noted, that President Aquino’s satisfaction rating among the constituents remains relatively high compared to his predecessors.

Pressed why he left Cabinet a couple of months back, Petilla admitted that he and President Aquino had some policy differences. However, he said, this was patched up before he resigned and that it ended well for the two of them.
The former energy secretary added that he thought it was the perfect time to leave the Cabinet post as such gave him enough momentum to explore his options.

Petilla admitted that he has a plan to run for the Senate in the 2016 elections. He would try to be elected as a senator under a platform that espouses government policies that would make the energy sector serve the interest of the poor.
The former energy secretary was also the governor of Leyte before he joined the Cabinet of President Aquino.

GAPASCA to award 12 scholarships in Gapan