The Farm Systems Development Corporation (FSDC) was one of those Marcos era organizations that went into oblivion after the People’s Power Revolution of 1986. It ceased to be in 1987 and left thousands of farmer cooperatives that it has established to face uncertain future.

FSDC was engaged in country development by going to the grassroots and espoused self reliance and initiative in pursuing its goals. The people under its employ were hard core in terms of commitment and dedication. They were led by an equally passionate technocrat, the late Teodoro C. Rey Jr., a product of the University of the Philippines, who rallied his people in transforming the rural areas into self sufficiency through the irrigators’ cooperatives they helped organize as the center of activities.

FSDC REUNION: Former employees of the Farm Systems Development Corp. take a brief time out from the proceedings at a recent reunion in Fullerton for this photo decades after the organization ceased operation in the Philippines because of political changes.

Just as the movement was making the farmers reach their full potentials in shaping their future FSDC became a victim of a political change.

Where are the visionary skillful men and women of FSDC now? Many remained in public service and some joined the diaspora to other countries where their talents were put in the service of their fellowmen.

Close to 30 of them met last May 10 at the Johnson Howard Hotel in the City of Fullerton for a reunion and pay tribute to their former bosses,  Teodoro C. Rey, Jr. and Manuel “Pogs” Gaspay, who have gone ahead to meet their Creator.

Doing the honors of paying tribute to the late TCR, as the former administrator is fondly called, was his former mentee, Woodbury University President, Dr. Luis Ma. R. Calingo, who holds the distinction of being the first Filipino-American to head a learning institution. 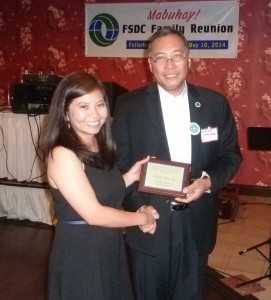 TRIBUTE TO A FORMER MENTOR: Woodbury University President, Dr. Luis Ma. R. Calingo, the first Filipino-American to head a university in the U.S. paid tribute to his former mentor, the late Administrator Teodoro C. Rey Jr. (TCR) of the Farm Systems Development Corporation at a recent reunion of its former employees in Fullerton recently. TCR’s daughter, Amelia delivered an emotional response on the tribute.

TCR’s daughter who honored the occasion with her husband Alfred and daughter Amelia, delivered a sentimental response for her father.

Reminiscing on the reunion where he met his fellow rural worker after more than 30 years, insurance executive Gilbert C. Dulay writes: “As I drove home along California I-57N, I had this feeling that everyone that night belonged to a family brought together by the late Administrator Teodoro C. Rey’s spirit.  After all, he is the person that bonds all of us.  This bond was most apparent when Jamie, TCR’s youngest daughter, was expressing her profound happiness. And as I was creating my own photo stories, I thought there was a genuine sense of oneness, devoid of any hierarchy and individual idiosyncrasies. For this sense of family, the reunion achieved its objective of rekindling the spirit of camaraderie strongly advocated by TCR.  It was one of the best reunions I have celebrated in my lifetime. There was a hint of resurrection of our formative and youthful days in FSDC”.