JERUSALEM – Former President Moshe Katsav was convicted Thursday of raping an employee when he was a Cabinet minister, the most serious criminal charges ever brought against a high-ranking official in Israel and a case that shocked the nation.

Katsav, 65, faces from four to 16 years in prison for the crimes, which included two counts of raping an employee in 1998 when he was tourism minister and lesser counts of indecent acts and sexual harassment involving two other women who worked for him when he held the largely ceremonial office of president from 2000-2007. 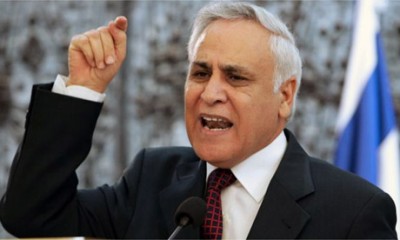 It was a stunning fall from grace for a man who rose from poverty to the highest levels of power. He became a model of success for Sephardic Jews – those of Middle Eastern origin – who for decades were an ethnic underclass in society.

The conviction of a former president on rape charges – virtually unheard of in a modern Westernized country – was another victory in a decades-long struggle by women’s rights groups to chip away at a macho culture that permitted Israel’s early political and military leaders to get away with great liberties.

Katsav has denied the rape charges, claiming he was a victim of a political witch hunt and suggesting he was targeted because he is Sephardic. Katsav was born in Iran and immigrated to Israel as a child.

A somber Katsav left the courtroom without commenting, surrounded by his legal team. He was ordered to surrender his passport while awaiting sentencing at a date that has not yet been set.

“We will continue to walk with our heads high and all the nation … with God’s help, will know that (my) father, the eighth president of the state of Israel, is innocent,” he said.
One of Katsav’s lawyers, Avigdor Feldman, said he hopes his client will appeal, but he has not yet decided how to proceed.

“I don’t know how strong he is, how long he can continue this saga,” Feldman said.
Katsav can appeal the verdict, but legal experts said Israel’s Supreme Court was unlikely to overturn. A presidential pardon is also highly unlikely because of the severity of the offenses. In his ruling, the judge said Katsav’s defense was full of lies.

Katsav’s case initially broke in 2006, when the then-president complained that a female employee was extorting him. The woman then went to police with her side of the story, detailing a series of sexual assaults and prompting other women to come forward with similar complaints.

According to the indictment, Katsav forced one woman to the floor of his office at the Tourism Ministry in 1998 and raped her. A second time that year, he summoned her to a Jerusalem hotel to go over paperwork and raped her on the bed in his room. The indictment alleged that Katsav tried to calm his victim by saying: “Relax, you’ll enjoy it.”

The indictment also alleged that he harassed two women during his term as president, embracing them against their will and making unwanted sexual comments.

On Katsav’s 60th birthday in 2005, an assistant offered congratulations. He then hugged her at length, sniffing her neck, according to the indictment. She complained to police, and the indictment said Katsav later tried to persuade her to change her testimony, earning him an additional charge of obstruction of justice.

The conviction by a three-judge panel was widely praised as a victory for Israel’s legal system and for women’s rights.

“The court sent two clear and sharp messages: that everyone is equal and every woman has the full right to her body,” Prime Minister Benjamin Netanyahu said in a statement. He also called the verdict a sad day for Israel and its citizens.

Katsav grew up in the hardscrabble southern Israeli town of Kiryat Malachi, where he was elected mayor, Israel’s youngest ever, at age 24. At the time, he campaigned on an anti-establishment message against Israel’s European-rooted leadership.

He rose through the ranks of the Likud Party, holding a series of midlevel Cabinet posts and becoming a source of pride and inspiration for Sephardic Jews. When he became president in 2000, Katsav denied being an “ethnic” candidate but noted his humble roots.

“After all, I am the first generation of the original immigration from Muslim countries to Israel,” he said at the time. His presidency, largely uneventful, was highlighted by his calls for calm and national unity during the traumatic experience of Israel’s withdrawal from the Gaza Strip in 2005.

Thursday’s conviction capped a four-and-a-half year saga that stunned Israelis, both with its lurid details and bizarre twists and turns.

Katsav resigned in 2007, two weeks before his seven-year term expired, under a plea bargain that would have required him to admit to lesser charges of sexual misconduct. He was replaced by former Prime Minister Shimon Peres.

But in a dramatic reversal in April 2009, Katsav rejected the deal, which would have kept him out of jail, and vowed to clear his name in court.

Around that time, he held a bizarre news conference in which he lashed out at prosecutors and the media and denied any wrongdoing. His erratic behavior, in which he shook in anger, waved a computer disc that he said proved his innocence and screamed at reporters in the room, raised questions about his state of mind at the time.

The president in Israel is head of state but a largely ceremonial post, representing the country at ceremonies around the world. The post, filled by parliament, is traditionally given to an elder statesman as a reward for years of public service.

Poe recalls immigrant life in US