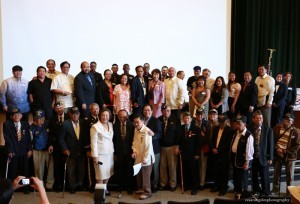 Photo above shows former President Fidel V. Ramos with Consul General Leo Herrera-Lim and members of the Board of Directors of the Filipino Veterans Foundation at the Bob Hope Patriotic Hall.

Former President Ramos is also Chairman of the Honorary Advisory Board of the Filipino Veterans Foundation in Los Angeles.

The event started with a program where he delivered his keynote address.  This was followed by a Q&A with the veterans and a photo opportunity session where refreshments were served.

In the WWII Veterans meeting with former President Ramos they raised their difficulties in claiming their pension benefits from the Philippine Veterans Affairs Office (PVAO) due to the process of confirming yearly that they are alive.  They also voiced their concerns over denied lump sums in the US and problems with Philippine pensions.

Former President Ramos concluded a meeting with the US Veterans Affairs over inefficiency in serving veterans.  He strongly urged Filipino-American WWII veterans and their advocates to continue lobbying to include Medical Portability Act that would allow US medical recipients to use their government-subsidized health benefits in the Philippines.