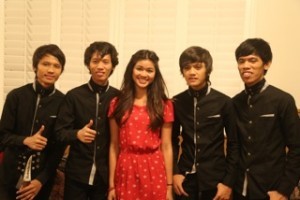 The REO Brothers pose with Hannah Marte, a beauty contestant to the Miss Binibining Pilipinas USA who became an instant fan of the rising young rockers from Tacloban, Leyte who were badly affected by Typhon Haiyan. – Photo by Rocky Marte

Glendale, CA — Four talented and amazing young lads who formed the REO Brothers Band  from Tacloban, Leyte, rocked Los Angeles when they performed at the Incarnacion Church  Gym last Saturday (March 15) in this suburban city. The three-hour nonstop concert was interrupted only by an intermission of speeches from organizers  and litany of recognition for sponsors and dignitaries in attendance including the mayor of Glendale.

Although they were not yet born when these hit songs became popular  in the 1960s and 1970s, the REO Brothers immersed themselves with these classic  music from their  father’s (Rey Otic) old albums. 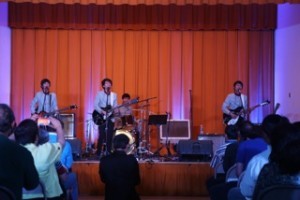 The REO Brothers out of four siblings derived their band name from the first letters of their first  names which is “R” and surnames  (Otic). They  formed their band four years ago using decrepit and borrowed instruments. After the devastation of Tacloban, Leyte that left them homeless and penniless, they left for Manila with uncertain future. “We faced many challenges but never lost hope. And even when we’re sad, we don’t bring it up on stage. Dapat masaya kami,” they shared that appeared in Inquirer, a Manila Daily.

The REO Brothers’ Band is comprised of Ralph (Bass player), the youngest at 17; Reymart, 19, playing Rythm  guitar; RJ, 21 on the lead guitar and Reno, the eldest at 24, playing the drums.

From a shy provincianos and plain looking skinny guys, the young rockers were transformed to a well-groomed and sharp-looking musicians in their well-tailored suits. 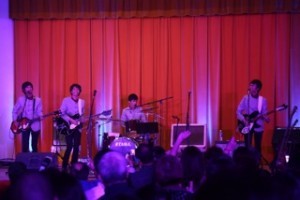 They auditioned at a Manila Nightclub with a wary club owner with a do or die predicament. They passed the audition and performed with aplomb.  Their performance earned rave reviews. Eventually, they performed  every Tuesday night at Primos Cuisine and Music Lounge in Manila  and assembled a large following after that. They were also invited to play in numerous parties. Then they were recommended to perform at Araneta Coliseum for a fund-raiser for Typhoon Haiyan victims topbilled by the likes of Lea Salonga, Lea Misalucha, Bamboo, etc. Thereafter, they performed at Madison Square Garden organized by the Filipino community in New York with high profile Filipino and American artists before performing in Los Angeles on their way back to Manila.

With only two weeks to prepare, their Los Angeles gig was organized by Rotary Club of Historic Filipino Town, the Alpha Phi Omega Alumni of Greater Los Angeles and Alpha Phi Omega Alumni of Eta Chapter (University of the Philippines). After it was promoted on social media, the concert snowballed. Well-meaning individuals, firms and restaurants banded together to support  their stay in this metropolitan city like providing their meals, board and lodging, transportation  and a trip to Las Vegas to watch the Fab Four Tribute to the Beatles show and Disneyland. 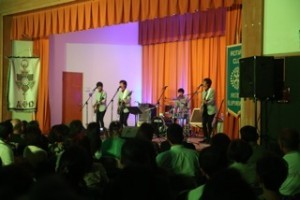 Although they did not have a formal music training, they sang and played their instruments  on the stage like a pro and strutted  with confidence.

Every song they performed were well-received like the Beatles’ Help, In My Life, Here Comes The Sun  (as the tagline theme they chose in their promotional tour), Please, Please Me, You Gonna Lose That Girl, Hard Day’s Night, I Wanna Hold Your Hands, From Me To You, With A Little Help From My Friends, Do You Want To Know A Secret, I Will, And I love Her, Twist And Shout,  I Saw Her Standing There, All My Loving, Tell Me Why,  I Feel Fine, Act Naturally,  I Wanna Hold Your Hands, Hey Jude and Can’t Buy Me Love; Dave Clark 5’s Because, You’ll Never  Know, Hurting Inside; The Ventures’ instrumental; The Beach Boys’ Surfin’ USA, Babarella; Lettermen’s Going Out of my Head; America’s Ventura Highway, VST & Co’s Awitin Mo, Awit Ng Pag-Ibig, Tayoy’s Magsayawan, Rock Baby Rock; and Gary Lewis & The Playboys whose song I could not figure out the title. 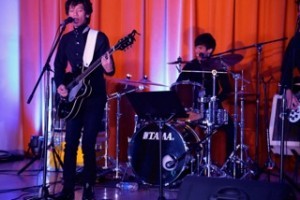 The motley crowd became euphoric when the rhythm guitarist egged the attendees to dance to their music. The ecstatic crowd of all ages — especially those  who grew up with the Beatles like me and the music of the 60s and 70s top hits — danced to our hearts’ content.

They gamely responded to the cue when popular lawyers of Southern California: Roman Mosqueda and Alma Luna Reyes boogied together to the tune of Ringo Starr’s “Act Naturally.”

From the euphoria written on their faces akin to the crowd when fans watched the Ed Sullivan Show in New York 50 years ago and other concert tour  the world over, the crowd went home filled with memories.

The REO Brothers might be an unheralded Beatle-inspired band for now but I bet my last dollar. These once-shy rockers will hit it big someday.

I can relate to the REO Brothers’ music because as a recreational band member playing Bass guitar for our APOGLA Fraternity named APO Friday Night Band in the late 1980s, some of my fraternity brothers in attendance approached me and said, “you should also be on the stage singing with them. Ouch! I just smiled. Thanks for the memories.  For feedback, e-mail: denino1951@gmail.com