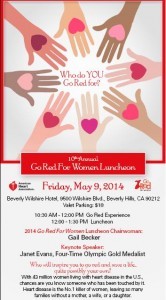 Evans is widely regarded as the greatest female distance swimmer in history and was recently named one of the Top 100 Greatest U.S. Olympians by Rolling Stone magazine.  A true legend in her sport, she earned four individual Olympic gold medals and one silver medal, won seventeen international titles and forty-five U.S. National titles, and broke seven world records, many of which stood for two decades. Outside of the pool, Janet has made a name for herself as a commercial spokesperson, author, reality television personality and motivational speaker.

Celebrating 10 years of saving and changing lives, the Los Angeles Go Red For Women Luncheon takes place on the Friday before Mother’s Day and the theme is, “Who Do You Go Red For?”

The half-day event kicks off at 10:30 a.m. with a cocktail and networking reception followed by a lunch program at noon.  Beginning at 10:30 guests will have the opportunity to get free blood pressure screenings provided by Huntington Hospital, enjoy a mini-makeover courtesy of Macy’s Estee Lauder Beauty Station and share photos via a social networking photo booth.

In addition to Evans, speakers at the luncheon will include Dr. Kathy Magliato, MD, MBA, FACS, one of few female cardiothoracic surgeons in the world, and Lidia Morales, a mother of three who was diagnosed with a rare heart condition when she was 33 years old. Dr. Magliato is currently the Director of Women’s Cardiac Services at Saint John’s Medical Center in Santa Monica, California, where she is developing a Multidisciplinary Women’s Health Center to address the cardiac needs of female patients.

Gail Becker, president of strategic partnerships and global integration for Edelman, the world’s largest public relations firm, will chair this year’s luncheon. Becker became involved  with Go Red For Women as both a tribute to her sister who is a stroke and heart disease survivor and  to encourage women to  give themselves permission to prioritize their own heart health despite their busy lives.

Heart disease causes one in three deaths among women and it is more deadly than all forms of cancer combined, yet only one in five American women believes that heart disease is her greatest health threat. Stroke is the No. 4 killer and leading cause of disability.

Go Red For Women has been working to improve the heart health of women for 10 years. Since 2004 more than 627,000 women have been saved from cardiovascular disease and 330 fewer women are dying per day.

About Go Red For Women

Go Red For Women is the American Heart Association’s national movement, created by women, for women, dedicated to uncovering the truth about women and heart disease: heart disease can kill you or a woman you love.  With more women dying of cardiovascular disease than the next three causes of death combined, including all forms of cancer, we are committed to fighting this No. 1 killer that is preventable. GoRedForWomen.org, a premier source of information and education, connects millions of women of all ages and gives them tangible resources to turn personal choices into life-saving actions. We encourage women and the men who love them to embrace the cause. For more information please visit GoRedForWomen.org or call 1-888-MY-HEART (1-888-694-3278). The American Heart Association’s Go Red For Women movement is nationally sponsored by Macy’s, with additional support from Orange County sponsor Edwards Lifesciences.

About the American Heart Association
The American Heart Association is devoted to saving people from heart disease and stroke – America’s No. 1 and No. 4 killers. We team with millions of volunteers to fund innovative research, fight for stronger public health policies, and provide lifesaving tools and information to prevent and treat these diseases. The Dallas-based association is the nation’s oldest and largest voluntary organization dedicated to fighting heart disease and stroke. To learn more or join us, call 1-800-AHA-USA1 or any of our offices around the country, or visit heart.org.