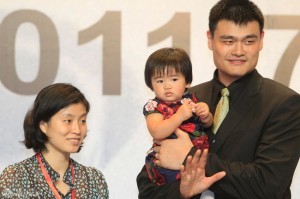 The 30-year-old Yao made his retirement official last week, telling a packed news conference in his hometown Shanghai that a series of foot and leg injuries forced him to end his playing career.

Francis, who is loved and remembered by many Chinese fans as a superb basketball player and the â€œbig brotherâ€ to Yao, told Xinhua reporters in Tuesday that he thought Yao was a â€œpioneerâ€ in bringing Chinaâ€™s basketball to the U.S. and meanwhile made the U.S. basketball known to billions of Chinese.

Yao was the first Chinese basketball player to break the barrier to come to the U.S. to play basketball and won respect, and Yaoâ€™s case enabled other Chinese players to follow suit, said Francis.

He said he saw many talented basketball players in Beijing, and hopes those players could learn the U.S. game better as Yao had set the example for them.

Francis said he was shocked by Yaoâ€™s decision to retire at first, but later on, he understood what made his old pal make the decision. Yao was under a lot of pressure to fulfill his role as â€œhe is Yaoâ€, and he â€œphysicallyâ€ cannot continue to fulfill his role as expected by others, said Francis, adding that Yao also needs to spend more time with family.

Looking back at Yaoâ€™s nine years with the Houston Rockets, Francis said he believed Yao made great contribution to the Rockets, NBA and basketball.

Comparing Yao with other famous centers in NBA, Francis said American centers may get an upper hand because basketball started in the U.S. and Shaquille Oâ€™Neal is undoubtedly the No. 1 center in NBA.

However, Francis said Yaoâ€™s achievement is also phenomenal because Yao learnt basketball in China and applied it in the U.S. and â€œhad such impact.â€

â€œYao is the type of person that made other outstanding NBA players like Oâ€™Neal and Dwight Howard become better, and verse visa,â€ said Francis. â€œThey learnt a lot from each other.â€

Francis, who said he is interested in training youngsters to play basketball, said he would like to cooperate with Yao, who also said that he would devote time and energy to train young players after his retirement, if there is a possibility in the future.

The former NBA star said he is planning to set up basketball camps in China, a country that he loves. The camp would be open twice a year, one in summer and one in winter.

The one-week camp will be set up in major Chinese cities including Beijing and Shanghai. Two hundred youngsters will be trained at each camp, and 75 of them will get the training for free.

Showing reporters around his home in downtown Houston which is filled with all kinds of items and gifts from China and his Chinese friends, including Yao Ming, Francis said though his contract with the Beijing Ducks did not work, his love for China has never changed.

Francis left the Beijing Ducks after a two-week stint with the Chinese Basketball Association club in December last year. â–

What It Feels Like To Get A Concussion [Concussions]

A date with destiny: Who will win this year’s NCAA Tournament?