GRAPEVINE, Texas – Trainer Freddie Roach has accepted the apology of rival Robert Garcia for his part in a video where he appears to encourage the mocking of tremors caused by Roach’s Parkinson’s disease as it features two of Garcia’s fighters, Antonio Margarito and Brandon Rios.

In the video, Margarito moans, “Oh, Freddie Roach,” extends his arms out slightly in front of him, appears to briefly shake his hands, and then tilt his head slightly to the left. Rios also appears to be acting as if he is having difficulty speaking, and also contorts his face. 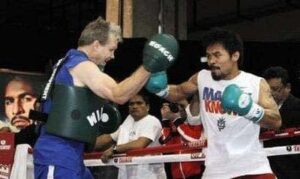 Now, yesterday at the press conference, you said that you would not accept an apology, but I understand that Robert Garcia personally called you and apologized over the telephone?

Roach: Well, because that apology at the press conference really was not an apology. That was more of a cover up because they said that we don’t know what Parkinson’s disease is. And they said that they didn’t know that I had Parkinson’s. But I’ve been written about and stuff so everybody in the world knows that.

But, you know, after I got off of the phone with Robert, he had apologized sincerely. He brought up how I have treated him when he comes to my [Wild Card Boxing Club] gym and how I’ve given him sparring partners. He said how if he wins this fight, he’s not the greatest trainer.

Robert said that I would still be the greatest trainer because I’ve had so many world champions. I felt like it was a very sincere apology. You know what? I’m a forgiving person and, you know, I think that they realize that they went a little bit too far. I was upset but I’m not anymore.

Can you shed some perspective on what it is like to have Parkinson’s disease for anyone who might not know?

You know what, after speaking with Robert, I don’t think that they meant me any harm, and I’m sure of that. They’re not bad people. So let’s leave it at that and I have accepted it and everything and let the best man win.

Do you have any final thoughts on the video controversy and any good that can come out of it?

Roach: It should never have run. It didn’t help anybody. It was directed toward me, but it affected a lot more people in the world. But maybe we should donate some of the purses of both parties to the Parkinson’s foundation.

Fitness trainers who text, shop, and even do your laundry