Freddie Roach: ‘Pacquiao vs. Algieri is like Boston vs. New York’ 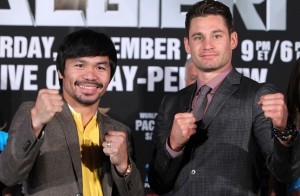 “Manny looks tremendous. He has worked hard against the best sparring partners he has ever had. He knows what is at stake here. Believe me, he wants an emphatic victory. He needs an emphatic victory. That is why he has gone the extra mile in this camp to achieve that,” said Freddie Roach. Pacquiao will face Chris Algieri on November 22 in Macau, China. Photo: Chris Farina/Top Rank

With just seven days to go until Manny Pacquiao vs. Chris Algieri World Welterweight Championship Fight Week begins, it seems like the winds of war are beginning to blow from Pacquiao’s Philippines-based training camp.

“I know New York is a sports capital desperate to hold on to its only world champion. But everyone in the Big Apple needs to realize that CHRIS ALGIERI is going up against a buzz saw in Manny Pacquiao,” said Roach, following Pacquiao’s latest training session.  “New York has had its share of sports miracle upsets in the past – Bobby Thompson’s ‘Shot Heard ‘Round the World,’ Jerry Koosman’s two World Series victories for the Miracle Mets and Joe Namath’s Super Bowl III MVP performance – but the reality is this, heart, no matter how big, can only take you so far.  On November 22, Manny is going to drop the curtain on The Chris Algieri Show.”

“You bet I am,” Roach continued.  “Remember, I grew up in Deadham, Massachusetts.  There is no love lost when Boston plays New York in any sport.  I live for beating a New Yorker.  And by the way, Dom DiMaggio was a much better centerfielder than his brother Joe.”

All times are ET/PT.