‘Fresh Off The Boat’ is coming soon on ABC 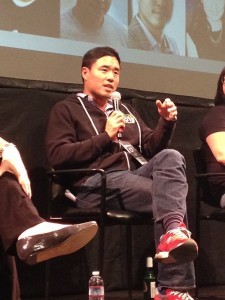 “When they first told me about the idea of making an all-Asian TV show on network TV, I thought, Good luck. I didn’t think it was going to be picked up. So now that it’s finally happening, we are very excited and hopeful that the viewers will be able identify with the characters.” – Film and TV actor, Randall Park, who plays Louis Huang in the show (also known for The Interview, Neighbors & Larry Crowne).

A special screening of the pilot episode was held last December 6 at the David Henry Hwang Theatre in Los Angeles for students, creatives, media executives and community organizations of the entertainment media. The screening was then followed by a panel discussion, moderated by actor and Asian American community leader, Amy Hill.

During the panel discussion, attendees of the event were able to learn more about how the show came about and the challenges faced by the producers and media executives in creating and presenting an Asian-centered show in today’s TV industry in the United States.  Members of the panel include actor and producer, Randall Park (who plays Louis Huang in the show), the show’s creator for television and executive producer, Nahnatchka Kahn, Executive Producer Melvin Mar and ABC’s  Executive Vice President for Comedy Development, Samie Kim Falvey.

Inspired by a true story, the show is based on the memoirs of celebrity chef and television personality Eddie Huang. Fresh Off The Boat is centered on the life of a hip-hop loving, 11-year old, Chinese boy (Eddie) trying to fit in. Set in Suburban Orlando, it also illustrates his family’s struggles of living in America during the 1990’s.

The show is a classic immigrant story seen through the eyes of a first generation Asian American child. Samie Kim Falvey (EVP for Comedy Development at ABC) said, “For years we’ve been looking for an immigrant family show because we felt that this was the original American story, and we felt that it was not being told. We knew that a show like this will transcend race and will be a love letter to America, if executed properly.”

“Fresh Off The Boat” will surely tickle your funny bone as Natch Khan’s creative comedic genius is very apparent in the dialogue (she’s also known for her work in Don’t Trust the B—- in Apartment 23). And though the show’s genre is comedy, it also depicts the more serious issues that immigrants face in their journey towards the American Dream. With the show having a very diverse set of writers, it was important for them to make the script appear authentic and very specific but still feel universal. The show is not just about Asians but about being an outsider in your world. It’s about how an individual gets judged or ostracized for being different, which is something that a person of any race can relate to.

Fresh Off The Boat stars Randall Park as Louis, Constance Wu as Jessica, Hudson Yang as Eddie, Forrest Wheeler as Emery and Ian Chen as Evan. Eddie Huang provides the voice over narration. The series is produced by 20th Century Fox Television and is set to air on ABC in 2015.