From picking Oscar winners to frying a tilapia 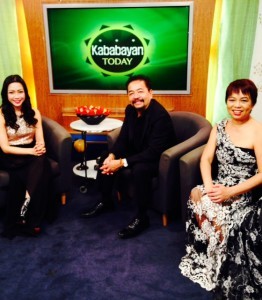 They agree on who will and who should win an Oscar award this Sunday; but they disagree (and sometimes argue) on how to fry a tilapia.

“Our biggest argument was how to fry a tilapia. Two writers attempting to be chefs bring out the worse in us,” said kababayan Hollywood journalist Janet Nepales.

Janet and her husband, Ruben Nepales are both members of the Hollywood Foreign Press Association (HFPA.) Every year, they guest on Kababayan Today’s Academy Awards Special, as they predict who will win and discuss who should win a gold statuette in four categories: Best Director, Best Actor, Best Actress and Best Picture.

“We did not talk about each other’s choices,” both disclosed before taping; adding that they wanted to surprise each other and see each other’s reactions about their picks. But as it turned out, they surprised each other by making the same choices –

And even when Janet said she intentionally changed her answer for the Best Picture category “to spice it up a bit,” the two ended up with the exact same picks – Will win: “12 Years a Slave,” Should win: “American Hustle.”

I’m not even waiting for the 86th Academy Awards on Sunday to see if they got it right; I’m already giving this HFPA couple a perfect score! “Tell me, is this the result of being married to each other for years; that you now have the same taste? Or maybe you now think alike?” I asked.

They replied that they actually have different tastes but they just know each other quite well. And that, I suppose, is the product of being together, not just living together; but also working together for almost 3 decades.

“We’ve been having fun for 29 years now. Some people say we look too young to have been married that long. But I was 14 and Janet was 12 when we got married—that’s why,” Ruben said, adding the last line jokingly.

But kidding aside, it’s obvious that these two take their work very seriously. Being the only Filipinos in the prestigious HFPA, they rub elbows with stars, cover Tinseltown’s glitziest affairs; and interview Hollywood’s controversial personalities… together. And that’s the key word.

“It is very enriching to work together because we are friends first and we make a good team. We are also honest with each other so we are each other’s worst critic and best fan,” Janet said. “We also help each other when covering events even if we work for competing newspapers. I don’t mind sleeping with the competition.’”

Janet writes a column in Manila Bulletin while Ruben’s is published in The Inquirer.

“Since we write for competing papers, there’s healthy competition between us. Janet concedes that I am a driven overachiever (I wasn’t a geek in college for nothing),” Ruben said. “She (Janet) jokes that even when are still coming home from an event that we had both covered, I had already written and filed my story…as I drove. We keep each other alert. When she suspects that I am on to something like a scoop, she starts asking me subtle but very probing questions. We like to out-scoop each other every now and then. There’s a grudging respect and pride when one manages to have a scoop.”

But whether they’re out-scooping each other; or arguing about how to fry a tilapia, Janet and Ruben abide by one rule in their marriage: “Never go to bed angry at each other,” they responded the same way, but separately. Janet emailed me her answers while in London. Ruben sent me his from LA.

There’s just one question left to ask: How do you fry a tilapia?

Jannelle So is Host/Producer of “Kababayan Today” that airs daily at 4:00pm on KSCITV-LA18; and syndicated in Hawaii on weekdays at 3:30pm on Kiku.  Catch previous programs at www.youtube.com/kababayanla18. Like her on Facebook: www.facebook.com/JannelleSoOFFICIAL. Follow her on Twitter: www.twitter.com/JannelleSo.

Comelec to file cases vs. 5 people for spreading ‘fake news’ on social media