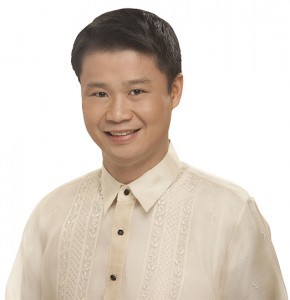 MANILA (Mabuhay) – Valenzuela City Rep. Sherwin Gatchalian vowed on Monday to push for the passage into law of House Bill No. 4714 which seeks to totally prohibit hazing and impose graver penalties on fraternities, sororities, student organizations and school administrators who will be involved in violent hazing in the future.

He made the pledge before the parents of Guillo Cesar Servando who died exactly a month ago after undergoing violent hazing in the hands of members of the Tau Gamma Phi Fraternity chapter of De La Salle-College of Saint Benilde.

Gatchalian’s filing of House Bill No 4714 was prompted by the death of the 17-year-old Servando, a sophomore student of DLS-CSB who died last June 28 due to injuries from hazing conducted by members of the said fraternity.

Aurelio Servando and his wife were invited by Congressman Gatchalian as his guests when President Benigno S. Aquino III delivers his fifth State-of-the-Nation Address (SONA) at the Batasang Pambansa Bldg. in Quezon City.

Yellow stickers bearing the anti-hazing logo and support for the Servando Act were distributed in the House of Representatives to mark the first month of Guillo Cesar’s death.

“I call on the families of hazing victims as well as groups who are against hazing to join me and Mr. and Mrs. Servando in pushing for the immediate passage into law of the Servando Act (HB 4714) that will put an end to all forms of hazing,” said Gatchalian, a senior member of the House committee on higher and technical education.

“I hope and pray that Guillo Cesar Servando will be the last in the long list of hazing victims who lost their lives while undergoing violent hazing in the hands of their would-be brothers,” the Valenzuela lawmaker added.

He also called on the public, particularly students and members of the academe, to remain vigilant by keeping track of the status of the preliminary investigation being conducted by the Department of Justice on the suspects behind the young Servando’s death.

“It is important that we closely monitor the Servando case until its logical conclusion which is the meting out of just punishment to those behind Guillo Cesar’s death,” Gatchalian said even as he lamented that no one has been convicted under the Anti-Hazing Law of 1995.

If enacted into law, Gatchalian’s bill will repeal Republic Act No. 8049 or the Anti-Hazing Law of 1995 which proved to be toothless in not only preventing hazing but also in going after those responsible for such violent acts, including school authorities who always keep a policy of silence on the matter.

“The so-called ‘Anti-Hazing Law,’ which has been in effect since 1995, has not been effective in preventing neophytes from being injured or worse, killed because of hazing. It actually only regulates hazing and provides a limited scope of liability,” Gatchalian pointed out.

Under the proposed law, officers of the fraternity, sorority, or organization as well as participating members involved in the hazing will face reclusion temporal and a fine of P1 million. If found to be under the influence of alcohol or illegal drugs, they will be fined P1 million and face the same length of jail time.

If the hazing resulted to death, rape, sodomy, or mutilation of the victim, participants will be penalized with reclusion perpetua and a fine of P3 million. And if found guilty, such judgment, regardless of when it was given, will be reflected in the scholastic record, personal or employment record of the person convicted.

“It is my sincere hope that this legislation will be the first step towards creating a peaceful and productive culture for fraternities, sororities, and organizations, guaranteeing that anyone who violates the human rights of a neophyte will be swiftly punished. We must ensure that no more aspiring and purposeful young people will meet a tragic and senseless end through hazing. Let the memory of Guillo Cesar Servando not be in vain,” Gatchalian stressed. (MNS)