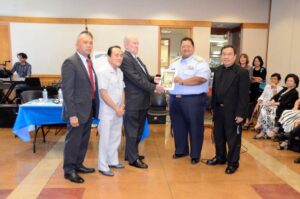 Cerritos, Calif. – Seventy years after the liberation of the Philippines which started in Palo, Tacloban, Leyte from the Japanese occupation, one of the liberators who participated in the battle of the Philippine Sea and later waded towards the shore with Pacific Supreme Commander Gen. Douglas Mac Arthur, then 21-years-old Kenneth L. Jahnke is still alive and kicking and enjoying the twilight of his life with the Happy Seniors of Cerritos Association.

Commander Jahnke, who will turn 92 on March 11 next year, was awarded a plaque of recognition by the  Happy Seniors of Cerritos composed mostly of Filipino-Americans on Oct. 1 at the Pat Nixon Senior Center in this city. The plaque reads, “Plaque of Recognition is presented to Kenneth L. Jahnke in honor and recognition of his dedicated service to the U.S. Military under the command of Gen. Douglas Mac Arthur who landed in Palo, Leyte, Philippines on Oct. 20, 2044 during the World War 11. Thus, liberating the Philippines under the Japanese occupation. This, therefore led to the granting of  Philippine Independence on July 4, 1946 by the United States of America.”

Mr. Jahnke now married to a Filipina physician after he was widowed, started his military career in the U.S. Navy on March 11, 1941 at age 17. After basic training at the Navy Training Station in San Diego, California, he was sent to Ford Island, Pearl Harbor, Hawaii and became a crew member of USS Oklahoma in September 1941. He fondly recalled with a boyish laughter, “My entry level salary then was only $19 a month. Thereafter, it was increased to $19 a month when I served in Pearl Harbor.”

On Dec. 7, 1941, the Japanese Imperial Army attacked the fleet of ships in Pearl Harbor which caused a great deal of damage including his ship USS Oklahoma. Three battleships were sunk. After the attack, the injured six-footer young lad was airlifted to the U.S. Naval Hospital in Long Beach for further medical treatment from shrapnel injuries.  His arms and legs were almost amputated. After he was discharged from the hospital, Mr. Jahnke enrolled at the Language School,  Presidio Army Base in San Francisco, CA. There, he learned Tagalog and Visayan languages. After finishing the language course, he went to Officer Candidates School.  After three months, he became a naval officer.

After serving on various ships during the war years, he was assigned to serve under Gen. Douglas Mac Arthur until 1946 making good use of his Philippine language skills. The U.S. forces occupied the Philippine Islands until 1945 where the esteemed five-star general and liberator made his famous speech, “People of the Philippines, I have returned.”

In retrospect, the retired naval commander who is still sprightly and regularly attends dancing parties with his Filipina wife Dr. Carmen Santamaria said,  “It was an honor to be with the commander of the Allied forces on that historic day on Leyte Beach.” He waded on the shore on the left side of Gen. Mac Arthur with such Philippine government luminaries like Gen. Carlos P. Romulo and the late President Sergio Osmena. He recalled that he got sick of malaria while in the Philippines.

After the war, Mr. Jahnke  also served in police action duties in Korea and Vietnam. He retired as full commander in 1965 with a rank of Lieutenant Junior Grade, one step above ensign or equivalent to  Lieutenant Colonel in the Army.

When asked what does he attribute for his longevity,  his quick retort was, “I’m married to a beautiful Filipina lady physician and with plenty of dancing with six  senior associations based in Cerritos, Anaheim, Westminster, Buena Park, Fullerton and Garden Grove.”

He added, “You keep young that way. I really love the Filipino people. They are great people.”

The Happy Seniors of Cerritos Association meets every first and third Thursdays of every month for dancing and fellowship with a live band.

From Burnt Out to Behind the Burner