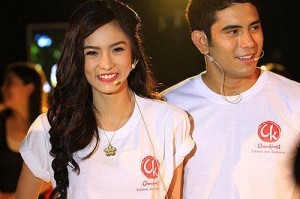 These were Gerald Anderson’s words in recalling his relationship with Kim Chiu during their time as a “love team,” which ended in 2010 amid the controversy surrounding their breakup.

The 24-year-old actor said his on-screen tandem with Chiu, unlike most on television at the time, was “different” because of how it was formed.

Not long after they exited the famous yellow house – Chiu was the edition’s grand winner, while Anderson finished 3rd – the two were tapped to topbill the drama series “Sana Maulit Muli” the following year.

Due to the success of their first TV series together, “Kimerald,” as they were referred to by their fans, were cast opposite each other in several other soaps—“My Girl” in 2008, “Tayong Dalawa” in 2009, and “Kung Tayo’y Magkakalayo” in 2010.

KC embarks on a UN-WFP mission to Uganda