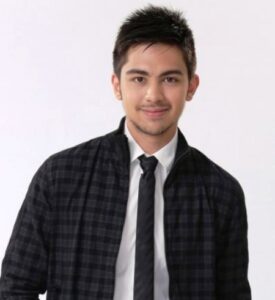 MANILA (Mabuhay) — Actor Derrick Monasterio has made the transition from teen star to more mature actor. With it comes a physical transformation that is nothing to scoff at.

The gambit has paid off. During his participation at the Cosmopolitan Carnival – formerly the Cosmo Bachelor Bash – recently at the SM Mall of Asia Concert Grounds, Derrick’s appearance elicited loud screams from the women in the audience.

To add to Derrick’s roster of calorie-burning activities, he says he is also trying his hand at dancing.

Derrick was taken off GMA’s “The Half Sisters” but, he clarifies, not because he has been a cause of delay in production.

The importance of the trip to him cannot be discounted. He plans to see his father, George Crimarco, a lawyer who is based in the States.
“Madalang kami magkita. He’s busy kasi, madami kaso (hinahawakan),” he said.

His said his dad has stopped supporting him and her sister when he joined show business. However, “When I asked for a graduation gift, binigyan ako ng $6,500.”

These days, Derrick is still seen on “Vampire Ang Daddy Ko” but he plans to lay low for awhile.

Heart gets diamond ring but not yet engaged