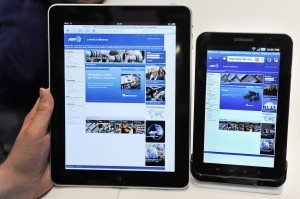 An Apple iPad is displayen next to Samsung's new tablet device, the "Galaxy tab" at Samsung's booth at the 50th edition of the "IFA" on September 2, 2010 in Berlin. The Galaxy Tab has a seven-inch (17.8-centimetre) touchscreen, slightly smaller than the iPad's 9.7 inches, and uses Google's Android 2.2 operating system. IFA, the world's largest consumer electronics and home appliances fair opens to the public from September 3 to 8, 2010. AFP PHOTO / ODD ANDERSEN

The number of personal computers shipped in the third quarter of this year tallied 91.8 million in a 3.2 increase from the same period in 2010.

â€œThe popularity of non-PC devices, including media tablets such as the iPad and smartphones, took consumersâ€™ spending away from PCs,â€ he continued.

Hewlett Packard (HP) continued to be the top computer maker, but China-based Lenovo was gaining ground and saw sales soar 25.2 percent to take the second-place spot from Dell, according to Gartner.

HP sales grew strongly in the United States despite talk that the US firm is mulling whether to spin off its personal computer business, the industry tracker reported.

Tablets and smartphones were expected to continue eating into PC sales, especially in the United States.

â€œThe main contributor to the weak consumer PC market in the US was intensified competition for consumersâ€™ money,â€ Kitagawa said.

â€œMedia tablets and smartphones took center stage in the US retail sector, and the expectation is for continuing demand for these devices throughout the holiday season,â€ she continued.

Jinggoy on SC ruling: A triumph of the masses