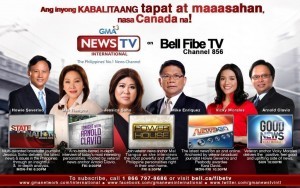 GMA News TV was the channel to watch out for in 2013 – launching groundbreaking new series and bringing home an unrivaled haul of international awards, while covering the biggest breaking stories of the year.

The coveted George Foster Peabody Award, a Silver World Medal at the New York Festivals, a Silver Medal at the US International Film and Video Festival, the UNICEF Asia-Pacific Child Rights Award, only Philippine finalist at the Japan Prize, the Philippine Quill Award for Excellence, the most television wins at the Catholic Mass Media Awards … these were just a few of the international and local honors thatGMA News TV took home the past year, led primarily by its documentary program Reel Time and its flagship newscast State of the Nation with Jessica Soho.

The only show of its kind currently on Philippine TV – Investigative Documentaries, hosted by Malou Mangahas (one of Metrobank’s Journalists of the Year for 2013) – solidly follows the paper trail behind issues every week.  Investigative Documentaries assesses the performance of political clans, studies the impact of government policies and investigates corruption. Trust the program will do even more of this in 2014.

I Juander is an almost weekly trending topic on Twitter.  Led by Susan Enriquez and Cesar Apolinario, the show has captured viewers’ hearts with its unforgettable social experiments and its entertaining discussion of Filipino culture, food, traditions and superstitions.

Hosted by veteran documentarists Kara David and Howie Severino, News To Go is the no-frills morning newscast with relevance, depth and insightful interviews that give context to the news.

Game-changing weekend documentary programs Reel Time and Front Row have been sweeping the awards the past two years.  The documentaries tackle poverty and social ills, telling the raw stories of the subjects themselves, using no hosts or voice-overs.

Moreover, GMA News TV International remains to be the ultimate news source of Filipinos across the globe as it offers live telecasts of the latest news coverage and breaking news from the Philippines’ most trusted news broadcast organization, GMA News and Public Affairs.

These programs, and many more, are available on GMA News TV International through its carriers in the Middle East, North Africa, HK, Singapore, Malaysia, Japan, Palau, Guam, Saipan, Australia, New Zealand and Canada.

Potential terrorist threats in Mindanao cited in US worldwide caution