Good bilateral relations between PHL and Indonesia to continue: Aquino 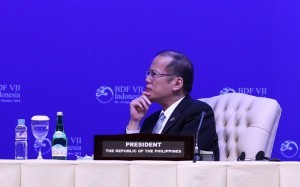 (BALI, Indonesia) President Benigno S. Aquino III focuses on the exchanges during the Opening Session of the 7th Bali Democracy Forum at the Nusantara Hall II of the Bali International Convention Center on Friday (October 10). The gathering is an annual, intergovernmental forum on the development of democracy in the Asia-Pacific region. (MNS photo)

BALI, Indonesia (Mabuhay) – President Benigno S. Aquino III has expressed confidence that the good relations between the Philippines and Indonesia will continue with the swearing-in of President-elect Joko “Jokowi” Widodo this month.

In an interview with the members of the Philippine media delegation here, President Aquino said the Philippines would do everything to maintain its good bilateral relations with Indonesia.

President Aquino was here in Bali on Friday to participate in the 7th Bali Democracy Forum, which he co-chaired with outgoing Indonesian President Susilo Bambang Yudhoyono on Friday.

President Aquino cited the agreement between the Philippines and Indonesia on maritime boundary delimitation as one of the positive results of the two nations’ good bilateral relations.

The Chief Executive said President Yudhoyono’s government also helped the Philippines in protecting the welfare and safety of overseas Filipino workers during the Arab Spring in 2011.

He also acknowledged Indonesia’s overwhelming assistance in the aftermath of the devastating Typhoon Haiyan (Yolanda), as well as its participation in the Mindanao peace process.