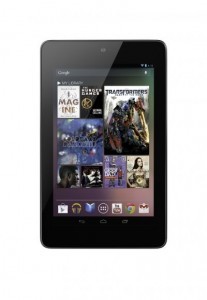 The Google Nexus 7 tablet is currently only available with 8GB or 16GB of storage.
©Google

(Relaxnews) – It’s official: Google is set to launch a 32GB version of its best-selling Nexus 7 tablet and it could go on sale as early as October 24. The new tablet will offer users much-needed extra capacity and will help Google maintain its position in the 7-inch tablet market.

For weeks, rumors and screenshots of retailers’ inventory pages have been appearing on technology blogs claiming that a new, double capacity tablet was on its way, but now a Japanese Twitter user @oppese has posted photos of an actual device he claims he received by mistake. He had placed an order for the entry-level 16GB tablet and was overjoyed when he opend the package.

Although the Nexus 7 was met with universal praise upon its US launch in July and subsequent roll-out across Europe and southeast Asia, users and experts alike have been critical of its limited capacity and its lack of an SD memory slot for expansion.

The tablet is currently only available with 8GB or 16GB of storage because, like Amazon, Google wants everyone to move to the cloud for storage and streaming — which is a good idea only if you have access to high-speed internet connection on the move and live in one of the territories where Google Play content streaming is supported (for example, music streaming is currently only available in the US). As the average HD movie can take up as much as 4GB of space, if you plan on taking a holiday with your Nexus 7, a few films, a couple of albums and one or two games and the device is full. The iPod classic may look extremely dated next to the latest generation of tablets and smartphones, but with 160GB of capacity there was never any doubt that wherever you went, all of your music, podcasts and all of your photos were coming too.

Currently, there is no hard evidence in terms of pricing, but Google’s decision to double the capacity of its tablets will be welcomed by all except early adopters.

Though the Nexus 7 set the standard when it was launched, the competition in the seven-inch tablet category is heating up. Amazon’s Kindle Fire HD (16GB plus cloud storage) and Barnes & Noble’s Nook HD range (up to 64GB of capacity via SD memory expansion slots) are proving popular and it looks almost certain that all three devices are about to be joined by Apple, which could be unveiling a seven-inch iPad as early as next week.

Mar Roxas to run for president in 2016 – Drilon