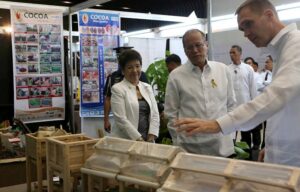 Speaking to reporters in Malacañang on Monday, Foreign Affairs Assistant Secretary for European Concerns Maria Zeneida Angara Collinson said President Aquino is set to sign various agreements with Germany when he embarks on his eight-day trip to Europe late this week.

“We are looking at the signing of a social security agreement, also an agreement to establish the Philippine-German Chamber of Commerce and Industry. We are also looking at a cooperation in technical vocational education and training,” Collinson said.

“We will promote the triple win project, which is essentially based on a previous agreement with Germany on health care professionals,” she added.

The government aims to deploy 500 nurses to Germany. So far, only 25 Filipino nurses are working in Germany, as most applicants have a difficult time passing the German language proficiency exam.

The government is eyeing to send 200 nurses in Germany by the end of the year.

Aside from nurses, President Aquino is also expected to discuss with his counterparts the Philippine-German Maritime Cooperation to increase employment opportunities for Filipino seafarers.

Collinson said there are about 200 German companies in the country, which focus on service-oriented industries, trading and manufacturing.

There has been a 6 percent increase in German tourists who came to the Philippines in 2012.

Marcos yet to pay fines in 1995 tax case conviction —petitioners

Why Hula When You Can Bula?

Become an American without speaking English