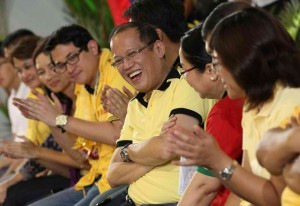 MANILA, Mar 14 (Mabuhay) — The Aquino government made an assurance on Thursday that it is doing everything to serve justice to the victims of the pyramid scam organized by Manuel Amalilio and his cohorts.

“We will continue to work for the successful prosecution of Amalilio et al. And as you know, there have been a series of complaints or cases filed in court because there have been determinations already of probable cause by the panel of prosecutors,” Justice Secretary Leila de Lima said in a press conference in Malacanang on Thursday.

Palace reporters asked De Lima if there is an assurance that Amalilio’s case will not be put in the backburner particularly with the ongoing incident in Sabah that might affect his return to the Philippines to face charges here.

In assuring the victims, De Lima said there are arrest warrants issued by different courts such as in Cagayan de Oro City and Pagadian City. The Department of Justice is also waiting for the Iligan City court to issue similar warrants against Amalilio and his co-conspirators at Aman Futures.

“There are several complaints filed and several are still under preliminary investigation and some are already in court, and there have been warrants of arrest. We will continue to work for the successful prosecution of Amalilio et al,” she said.

Currently, the DOJ is working on how to repatriate Amalilio, De Lima said. Amalilio is currently serving a two-year sentence in a Malaysian jail for using a fake Philippine passport.

“So if the right time comes, kung mag-die down na ‘yung heat or ‘yung situation sa Sabah, then we can already send our team to Kuala Lumpur,” she said hoping that the ongoing conflict in Sabah won’t affect the prosecution of Amalilio in the Philippines.

The DOJ cancelled the trip of its team who was supposed to leave last Tuesday for Kuala Lumpur to begin the initial talks for Amalilio’s repatriation.

De Lima said they do not believe the current situation in Sabah would yield a fruitful outcome if the DOJ proceeds with the talks. The cancellation is one of the “unintended consequences” of the acts of Kiram’s group in Sabah.

Amalilio, the head of Aman Futures Group, allegedly duped some 15,000 people in the Visayas and Mindanao amounting to P12 billion. (MNS)

NO IMMEDIATE EASING OF RESTRICTIONS EVEN AFTER VACCINE ROLLOUT