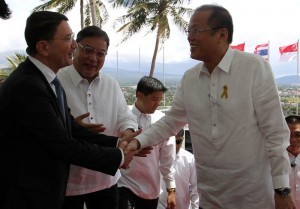 President Benigno S. Aquino III is received by UNWTO secretary general Taleb Rifai and Tourism Secretary Ramon Jimenez, Jr., upon arrival for the United Nation World Tourism Organization (UNWTO) – ASEAN International Conference on Tourism and Climate Change at the Oriental Hotel in Taysan Hill, Sto. Niño Village, Legazpi City, Albay on Monday (May 19, 2014). The conference will address a whole range of relevant issues, from the competitiveness and sustainability perspectives, identification of specific challenges and vulnerabilities, to the examples of relevant actions. It will also provide opportunity to share with the international community at the ministerial and expert levels further knowledge and lessons learned in tourism and climate change from other countries. (MNS photo)

MANILA (Mabuhay) – Malacañang has condemned the slaying of a radio broadcaster in Davao del Sur on Friday morning.

“We condemn the killing of radio broadcaster Sammy Oliverio in Digos City, Davao del Sur this morning, May 23,” Secretary Coloma said in a statement.

“We note that Mr. Oliverio was a block timer, airing programs in behalf of the local government unit over Radyo Ukay and other radio stations in Digos City,” he said.

Oliverio was shot dead by motorcycle-riding gunmen in Digos on Friday morning when he and his wife were headed home from the market.

“The PNP has been directed to exert maximum efforts to track his assailants and bring them before the bar of justice,” Coloma said. (MNS)

Employment agency must be stopped