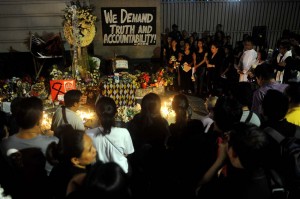 MANILA, May 3 (Mabuhay) – Filipino bomb-maker Basit Usman, the target of a massive government dragnet since the January 25 Mamasapano mission where he escaped as police commandos were closing in on Malaysian terrorist Marwan, was killed before noon Sunday, according to reliable military intelligence sources.

“Yes, Usman is dead, It’s confirmed,” a high-ranking intelligence officer said, though an official military confirmation has been withheld “pending verification on the ground.”

The encounter happened at aroun 11:30 a.m. in Barangay Mote near Camp Afdal, according to the intelligence source.

Between them, Marwan and Usman had been blamed for killing dozens of Filipinos in several missions in a decade-long career. Both had warrants of arrest for these bombing capers. (MNS)

Families to ‘Walk n’ Roll’ on Sept. 20 for ataxia that afflicts many