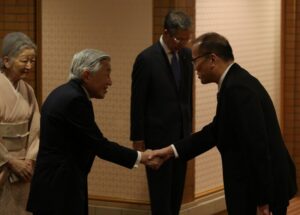 (TOKYO, Japan) President Benigno S. Aquino III exchanges pleasantries with Their Majesties Emperor Akihito and Empress Michiko at the Kiku Room of the Imperial Hotel on Friday (June 05) during his State Visit in Japan. (MNS photo)

MANILA (Mabuhay) – The government is preparing to discuss details on the proposed Visiting Forces Agreement between the Philippines and Japan, amid China’s aggressive reclamation works in disputed areas in the South China Sea.

Department of Foreign Affairs (DFA) spokesperson Charles Jose said, “Details still have to be discussed and agreed on after the President proposed the idea.”

President Benigno Aquino III on Friday announced the proposed defense agreement while he was still in Japan.

Presently, the Philippines has VFAs with the US and Australia. Such a defense deal provides for joint exercises and foreign military presence in the archipelago.

On the other hand, both Japan and the Philippines are locked in territorial rows with China.

Tokyo has overlapping territorial claims with Beijing over the Senkaku Islands, which the Chinese call Diaoyu.

Meanwhile, the Philippines has been engaged in a spat with China over resource-rich parts of the South China Sea, which Manila calls the West Philippine Sea.

Manila has already sought international arbitration to resolve the dispute.

For his part, Armed Forces of the Philippines public affairs chief Lt. Col. Harold Cabunoc said: “Anything that would boost our capability to defend our country and protect its interest is welcomed.”

But he did not elaborate, saying the concern is still at the DFA level.

AFP spokesperson Brig. Gen. Joselito Kakilala, meanwhile, declined to comment on the matter, saying they “have constraints to talk about [it].”

But Bayan Muna Rep. Neri Colmenares said the proposed VFA with Japan “would only lead to our further dependence on other countries.”

“There is already a standing VFA between the Philippines and the US as well as Australia and it has done nothing to modernize the AFP let alone deter China from its aggressive actions,” he said.

“As things stand, almost all our former colonizers already have a VFA with the Philippines,” he added.

Colmenares also said that with another VFA or military pact with other countries, the Philippines would become “a bigger magnet for attacks of these countries’ enemies.”

“We would become the theatre of war of countries that are only here because of their vested economic, political, and military interests,” he said. (MNS)