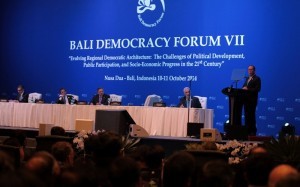 MANILA (Mabuhay) – The government and the private sector must continue to work together to sustain the success of the business process outsourcing (BPO) industry, President Benigno S. Aquino III has said.

The story of the BPO industry in the Philippines is about hard work, ingenuity, sacrifices, and success, President Aquino said in a speech delivered during the close of the International Information Technology – Business Process Management Summit in Makati City on Tuesday.

The President noted that the industry became a global leader in just a few years, and as such, it will be emulated around the world.

“However, we must also realize that the success of this industry has always been rooted in innovation, perseverance, and an eye for opportunity,” he told the summit participants.

“This is why we must continue working together, public and private sector alike, to find new ways of maximizing the potential of our people, and to consolidate our leadership position in this industry.”

On the part of the government, the President said the Technical Education and Skills Development Authority (TESDA) continues to enhance the capacities of people who want to join the business process management industry.

The administration, he said, has so far invested more than P1.3 billion in Training for Work Scholarship Program for the IT-BPM sector, producing more than 65,000 graduates, 70.7 percent of whom are already working in the industry.

At the same time, the government allocated P125 million for the roll out of the Service Management Program under the Commission on Higher Education, being done in partnership with the industry, he added.

The program is a 21-unit course designed to equip students with the skills needed for entry-level positions in the industry, he said.

The Chief Executive reported that as of last June, the government and the industry have trained 545 instructors to teach subjects for the program, with more training sessions scheduled in the coming months.

He said that this kind of measure will be a welcome boost in developing the country’s Next Wave Cities, and in spurring the continued growth of the BPO industry, not just in Metro Manila but also in the provinces.

Six other Philippine cities also made it to the list, namely Cebu, Davao, Sta. Rosa, Bacolod, Iloilo, and Baguio, he said.

As of last month, he said, employment in the industry has reached the one million mark, well on its way to meet the industry’s target of employing more than 1.3 million Filipinos by 2016.

He also said that during his recent trips to Europe and the United States, he convinced companies to invest in the country’s BPO industry.

The summit, spearheaded by the Information Technology and Business Process Association of the Philippines, brought together top resource speakers, domain experts, and prominent executives from both private and public sectors.

The summit, held from October 13 to 14, explored current issues and emerging trends in the IT-BPO industry. (MNS)