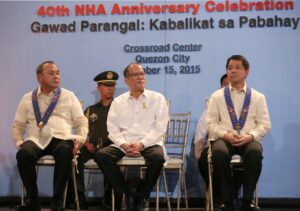 MANILA (Mabuhay) – The government’s spending on public infrastructures and other programs will further increase before the year end, according to the Department of Budget and Management (DBM).

“While our measures to pick up disbursements have taken some time to bed in, we are now seeing the results of agencies streamlining their procurement processes,” Budget Secretary Florencio Abad said Friday.

In August, government disbursements increased by 15.3 percent year-on-year to P161 billion from P140.1 billion. This was driven by the 29.2 percent growth in infrastructure spending and capital outlay, according to the latest DBM report.

Infrastructure and other capital outlays amounted to P25.4 billion, compared with P19.7 billion recorded a year earlier as construction of classrooms, farm-to-market roads and roads-to-tourist destinations picked up.

But the government still missed its target on public infrastructure spending.

Actual disbursements for infrastructure and capital outlays were 7 percent below the P27.5 billion on program for August. The amount also declined by 33.7 percent from the P38.3 billion released in July.

“But with measures in place such as the GAA-as-Release-Document regime and Full-time Delivery Units in all agencies, we should be able to sustain the momentum we’ve built up in recent months,” Abad said.

Government spending has increased by 20 percent on average during the last three months, compared with the 6.7 percent growth tracked in January to May.

Disbursements from January to August totaled P1.44 trillion or 11.4 percent above the P1.3 trillion booked during the same period in 2014. This was primarily brought by increases in maintenance (26.6 percent) and infrastructure spending (21.5 percent).

As of end-August, the government will still have to release P208.3 billion.

“The measures that have improved spending performance will have more time to take root in the bureaucracy next year. This is important because government will be prepared for the expected acceleration of public spending before the elections in May,” Abad said. (MNS)