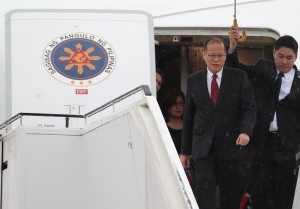 The amount will cover the transportation, accommodation, food, equipment and other expenses of Aquino and his delegation.

Aquino arrived in Boston on September 22 to attend the United Nations Climate Summit and to meet with business leaders, Executive Secretary Paquito Ochoa Jr. said. He went straight tot he United States from his visit to Europe.

Ochoa said Aquino will share with business leaders and the Filipino community in the US “the experience and successes of our country in implementing reforms and in dealing with the problem of corruption in government to political and business leaders in the US.”

“He sees this visit to the US as an opportunity to push our agenda on trade, tourism, peace and security as well as further strengthen ties between our country and the US,” he added.

Among the key personalities he will meet are the chief executive officer (CEO) of the New York Stock Exchange (NYSE), the CEOs of the US Chamber of Commerce and the US-Asean Business Council.

Aquino is also expected to give a speech during the climate summit.

“President Aquino will emphasize the need for world leaders to stand together to address climate change and its adverse effects on people and economies. The President is well aware of the impacts of climate change especially to vulnerable developing counties like the Philippines,” Ochoa said. (MNS)

Robredo: I’m the only true blue Bicolano among all VP bets

Baidu is building its own self-driving car