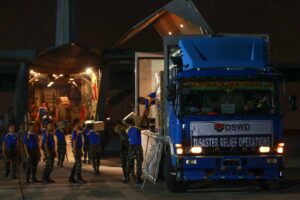 Members of the Philippine Air Force load relief goods from the Department of Social Welfare and Development to a C-130 airplane on Wednesday at the Villamor Airbase in Pasay City. The relief goods consist of food packs, blankets, and other necessities, for affected families in Baler and Casiguran, Aurora. (MNS photo)

MANILA  (Mabuhay) — Malacañang on Saturday said the government will start the “build back better” phase as its agencies continue relief efforts for those affected by tropical cyclone Lando in Luzon.

“Moving forward, we will remain in close collaboration with other sectors as we build back better the affected areas,” Deputy Presidential Spokesperson Abigail Valte told state-run Radyo ng Bayan.

Valte also cited that the government’s response efforts for Lando has been credited by the United Nations Office for Disaster Risk Reduction (UNISDR).

“The United Nations Office for Disaster Risk Reduction credited this improvement to preemptive evacuations and the early communication of warnings,” she said.

Valte said that the key to the government’s successful response to Lando “lies in partnership.”

“As a result, we were able to minimize the number of casualties, compared to previous typhoons,” she said.

She added that close coordination from the national down to the local levels and other sectors was the main factor for the successful evacuation of people living in high-risk areas.

Valte reported that 5,426 families or 23,993 people in Regions I, II, III, IV-A, and Cordillera Administrative Region were preemptively evacuated.

The government has counted a total of 46 deaths from Lando’s wrath as of 6 p.m. Friday.

The National Disaster Risk Reduction and Management Council said at least 1.6 million people were affected by the cyclone in seven regions in Luzon.

The government has pegged Lando’s damage to agriculture and infrastructure at P9.5 billion. (MNS)

Cainglet: The ‘right choice’ for Carson