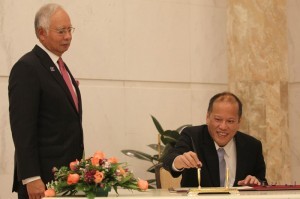 This was in reaction to the speech on Wednesday of Senator Miriam Defensor-Santiago during the graduation ceremonies of Gordon College in Olongapo City.

“Honorable Senator is a brilliant professor and an expert in constitutional law. We certainly appreciate her insights and opinion on the Comprehensive Agreement on the Bangsamoro. We assure the good Senator and the public that through every stage of the negotiations, we remained ever mindful of the President’s (Benigno Aquino III) instructions that any agreement we must conclude must be within the framework of the 1987 Constitution, and accordingly, the roadmap set by the CAB leads to Congress as the established lawmaking institution,” said GPH peace panel Chair Miriam Coronel-Ferrer in a statement.

“We will be seeking a meeting with the Honorable Senator and other legislators to extensively discuss the different provisions in the CAB and to allow for a deeper understanding of the context and substance of the documents,” she added.

The Bangsamoro Basic Law, as enacted by Congress, shall serve as the organic act for the autonomous region in Muslim Mindanao provided for in the 1987 Constitution.

Defensor-Santiago, in her speech, said she believes that the recently signed CAB does not respect the 1987 Constitution.

“I regret that, after my preliminary studies, I have concluded that the Framework Agreement on the Bangsamoro is unconstitutional,” said Santiago, chair of the Senate committee on constitutional amendments.

The lady senator noted that the Philippine Constitution is supreme and it provides for the powers of the state.

Thus, Defensor-Santiago said, “the agreement diminishes the sovereignty of the Philippine Government by listing what are the powers that the central government can retain.”

“In other words, the agreement attempts to redefine the sovereignty of the Philippine state,” she noted. (MNS)