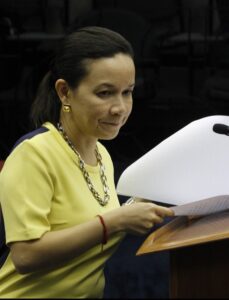 SOUTH COTABATO (Mabuhay) – Senator Grace Poe assured the public she is one with the country in forging a better future for the nation as she addressed the people of South Cotabato during the 16th T’nalak Festival and the 49th anniversary of the province.

Poe also did not sound like she was about to let go of Senator Francis Escudero, her preferred running mate should she run for higher office in 2016.

In her speech as guest of honor, Poe pointed out what she and Escudero have achieved together.

She mentioned their work in pushing for decent meals for students and funding for daycare center. By herself, she also pointed out how she authored the free mobile text alerts law for natural disasters.

In an apparent dig at her potential rivals for the presidency, Vice President Jejomar Binay and Interior and Local Government Secretary Mar Roxas, Poe stressed that leaders need not just the right experience and competence but also the heart and honesty or faithfulness to the public.

She also stressed the importance of the rule of law and of holding accountable those with offenses to the nation.

Poe also appeared to rebut critics of her experience as she pointed out her role in investigating the Mamasapano incident as well as the problem of transportation in Metro Manila.

The MRT is under the Department of Transportation and Communications (DOTC) controlled by the Liberal Party (LP), which has been castigated in the past by Binay.

Poe also stressed they will scrutinize the Bangsamoro Basic Law (BBL) in the Senate, underscoring the importance of keeping the country intact.

Poe also paid tribute to South Cotabato’s devotion to her father and how they made her number one senator in the province in the 2013 elections. (MNS)