Grace Poe to Aquino: What do you want next admin to do? 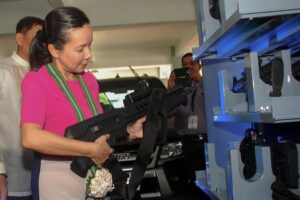 Senator Grace Poe inspects a Tabor assault rifle at the Philippine Drug Enforcement Agency (PDEA) headquarters after gracing the 13th anniversary of the agency on Tuesday where she was the keynote speaker. Poe said she is working on raising the reward money for informants. (MNS photo)

MANILA, July 27 (Mabuhay) – President Benigno Aquino III should present in his last State of the Nation Address what he wants the next administration to do after he bows out of office less than a year from now, administration ally and survey frontrunner Senator Grace Poe said on Monday.

Poe made the remarks after the Senate convened for the 16th Congress’ third and last regular session and hours before Aquino delivers his final SONA.

Poe recently topped the surveys on Filipinos’ preferences on who should succeed Aquino in 2016. She, however, has repeatedly said she has yet to decide if she will seek a higher position next year.

The senator said she also wants to hear the President prioritize the long-pending Freedom of Information bill.

The FOI bill easily hurdled Poe’s Committee on Public Information and has since been passed on third and final reading by the Senate.

The House, however, has yet to pass its own version.

Poe said she also wants the President to give updates on agriculture sector and the Metro Rail Transit.