Gracious Donaire humbled by Walters via TKO to snatch title 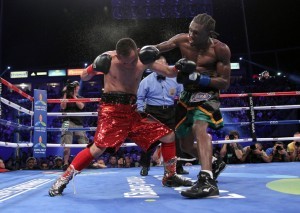 Undefeated Jamaican Nicholas Walters delivers a searing blow to Filipino star Nonito Donaire on his way to knocking out the Filipino champion with one second remaining in the sixth round Saturday to win the World Boxing Association featherweight title.Photo: Chris Farina/Top Rank

Walters landed a powerful overhand right to the left temple that sent the champion crumpling to the canvas and referee Raul Caiz counted out Donaire at 2:59 of the sixth round.

“I invited him in and then I caught him with that powerful shot,” Walters said. “It was tough work. He’s a super world champion. He caught me (with) a few shots early.”

Donaire, who had never been knocked down in his career, was sent to the canvas for the first time in the third round before being sent down for good.

“He knocked the (hell) out of me,” Donaire said. “I was at my best. I never trained this hard. He came out as tough as I thought he would be.”

Walters, three years younger than Donaire at 28, improved to 25-0 with his 21st career stoppage inside the distance in his first world title bout.

Donaire, who fell to 33-3, said he needed to re-evaluate his career plans, potentially looking to a lower weight class, after being unable to cope with the superior size of Walters, who also opened a cut over the champion’s right eye.

“I’ve got to go back to the drawing board,” Donaire said. “I just can’t compete with guys like Walters. He was overwhelming. I couldn’t match his size and his power.”

Donaire had won titles at 112, 118 and 122 pounds and was defending for the first time the WBA crown he won in May at Macau over South African Simpiwe Vetyeka.

Donaire was able to land a left hook that stung Walters just before the end of the second round.

“I got a little bit too confident,” Walters said. “He caught me with a very good shot. Boom.

“I recuperated from the shot just by walking to the corner. I came out and I knew I had a job to do and I went out and got that job done.”

The Caribbean fighter answered by inflicting Donaire’s first career knockdown with 30 seconds remaining in the third round, slamming a right uppercut into the champion’s chin.

Walters opened a cut over the right eye of Donaire in the fourth round and used his superior reach to effectively jab and keep the Asian fighter at a distance until the final punch.

Pacquiao may not need Mayweather anymore