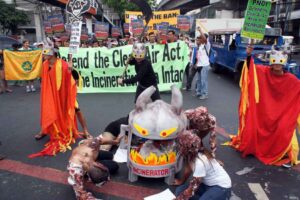 Environmental activists dramatize the effects of burning waste using incinerators during a protest on Tuesday. The groups asked the government to follow the Philippine Air Act and not be swayed by attempts of interest groups to lift the ban on waste incineration. (MNS photo)

MANILA (Mabuhay) – An environmental group on Monday expressed its disappointment over the decision of the Department of Environment and Natural Resources (DENR) to issue a tree-cutting permit to the developer of the historic Army and Navy Club in Manila, saying it is inconsistent with the National Greening Program of the agency.

Gwen Borcena, executive director of Green Research, said in a Balitanghali interview that the decision of the DENR officials, including Secretary Ramon Paje, goes against the campaign of President Benigno Aquino III to protect the environment.

Borcena said Paje should be “more serious” in listening to the opinions of civil society organizations and heritage consultants before the DENR issues permits for “controversial” projects such as the restoration of the Army and Navy Club.

According to the permit signed by National Capital Region OIC Lourdes Wagan, 31 trees are allowed to be cut down, while 13 are meant to be earth-balled. Some of trees that are being cut down are balete and acacia.

In a separate interview, DENR-NCR Assistant Regional Director for Technical Services Sofio Quintana said every tree to be cut for the project will be replaced with 50 seedlings.

Borcena however said that the planting of new trees does not necessarily make up for the trees—centuries-old or not—that have been cut down.

Quintana said that while the DENR is also against tree-cutting, it is necessary to issue permits for such purpose to give way to development projects.

Green Research said it will consult Architect Jun Palafox of architectural firm Palafox Associates, the developer of the Oceanville Hotel and Spa Corp., in place of the Manila Army and Navy Club.

Borcena said they have received reports that the plan of Palafox does not entail the cutting down of trees in the area. (MNS) 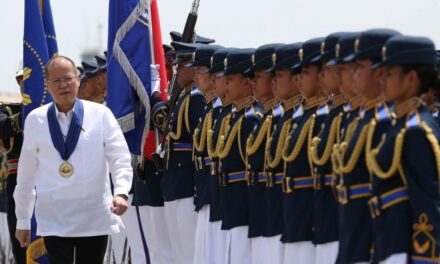 Amid losses, Gilas still a source of PHL pride –Palace