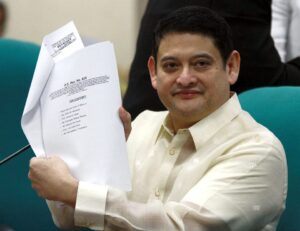 Senator TG Guingona , chair of the Blue Ribbon Committee together with Senators Antonio Trillanes IV and Koko Pimentel present to the media the list of the persons to be detained in connection to the investigation of the Senate Blue Ribbon Subcommittee on the alleged overpricing of the Makati City Hall Building 2 and other anomalies. Included in the list are Makati Mayor Junjun Binay and six other Makati city officials. (MNS photo)

MANILA (Mabuhay) – Senator Teofisto ‘TG’ Guingona III on Wednesday welcomed the signing of the law amending and strengthening the Sandiganbayan’s function and structure.

”It is a welcome development. We cannot stress enough the importance of extracting accountability in a timely and relevant manner,” Guingona said after President Benigno Aquino III Republic Act No. 10660 or “An Act Strengthening further the Functional and Structural Organization of the Sandiganbayan.”

”Our justice system is undermanned and overburdened. The Sandiganbayan needs additional divisions for it to fulfill its mandate of rendering justice in an efficient and speedy manner,” Guingona added.

Under the new law, the anti-graft court’s division will increase from five to seven for the immediate disposal of the pending cases before the Sandiganbayan.

The amended law also lowered the number of justices to two from three for a session in each division to have a quorum.

”By increasing the capacity of the Sandiganbayan and rationalizing its procedures, the court will be more capable in performing its principal function of eliminating graft and corruption in the government services,” Guingona said.

”The new law aims to ensure that justice will be implemented with the highest level of integrity,” he added.

The amended law also states that budget for the hiring of additional justices and staff will come from the special court’s current appropriation. (MNS)

A quest for justice