Gutierrez family to star in their own reality show 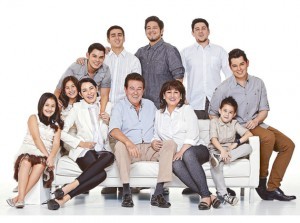 THE Gutierrezes are set to take center stage as they star in their own reality program entitled “It Takes Gutz to be a Gutierrez.”

Produced by Royal Era Entertainment and TV 100 of One Mega Group, the two-part special features the real, no holds barred, honest and unedited life of the showbiz family.

Under the direction of Michael “Mike” Carandang, who also produced US shows like “America’s Next Top Model” and “The Tyra Banks Show,” the reality program is the first of its kind in the Philippines. It follows the same concept of US reality programs “Keeping Up with the Kardashians,” “The Osbournes” and “Mrs. Eastwood & Company.”

Carandang said they will follow every member of the family, from Annabelle Rama, Eddie Gutierrez, Ruffa, Richard, Raymond, Elvis, Richie Paul, Rocky, to the younger ones, Venice and Lorin Bektas.

A camera will record their every move, daily routines and even capture some family drama.

“What we promise you are real, honest, no script (program). We’ll show you what it takes to be a Gutierrez and we’ll see na even though they’ve been through controversies or friction within them, they are still a solid family one could be proud of,” said Mike.

“We all know them as a showbiz family, but what I want people to see is their relationship with each other. How is Tita Annabelle to Tito Eddie and as well as the kids,” he added.

The Gutierrez matriarch Annabelle said they have been offered to do this kind of show for the past three years but there were conflicts with her children’s contracts, especially with Richard’s.

But now that they are not all tied up to one network, Rama said it’s the best time to do this kind of project.

Rama added the viewers will get to know the real members of the family as they will be in their most natural.

As for seasoned actor Eddie Gutierrez, he’s excited to do this kind of program with his kids and grand children.

For twin brothers Richard and Raymond, they know they are in capable hands of Carandang and they are happy to offer something new to the Filipino audience.

“We’re very excited for it, the first ever reality show like this in the Philippines. It’s going to be exciting,” Raymond added.

For Ruffa, the show will give everyone a glimpse of how they are as a family, how they handle their everyday lives and how they weather the storms.

“I believe that we are survivors. We’ve been through a lot of ups and downs in our lives, and yet here we are still standing strong and facing individual battles we’re going through right now,” said Ruffa.

“It Takes Gutz to be a Gutierrez” will be aired first quarter of 2014. However, the Gutierrez family has yet to announce on which channel this show will air. (MNS)