Handbook For An Unpredictable Life

The riveting story of “Handbook For An Unpredictable Life,” written by actress/dancer/choreographer Rosie Perez  is a heartbreaking book of surviving a mentally ill mother and the rigid rules of the Catholic nuns who ran the children’s home in New York’s Westchester County.

Rosie Maria Perez was born on September 6, 1964 in the Bushwick area of Brooklyn, New York to her mother, Lydia Perez and merchant marine dad, Ishmael Serrano. Both of her parents were from Aguadillo, Puerto Rico but both of them were apparently “married to other people when they met” and Rosie was born from that affair. 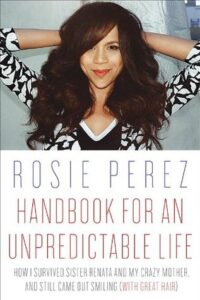 “Handbook For An Unpredictable Life,” written by actress/dancer/choreographer Rosie Perez

She became a “ ward of the State of New York when her mother took her from an aunt who was raising her and she was transferred to a group home at the age of 3 until she reached the age of 12.” Though her mother and aunt visited her frequently, her father also tried making an unsuccessful custody.In the book, Rosie narrated how being housed at Saint Joseph’s Catholic Home for Children in Peekskill, New York, which was called “the home” was where at the young age of three, she learned their daily routine on everything: they were told “what to do, when to do it,  how to do it; when to wake up, when and how to shower, when and how to clean up, when to eat, when and how to play, how to pray and even when to pee and poop and how to clean them.”

She recalled being punished one morning, when the nuns found out she had a nightmare the night before, and she ended up soiling her bed sheet  A nun named Sister Elizabeth-Claire “lifted my nightgown and smacked me hard across my bottom; I tried to use my hands to block the stinging and painful blows, but she grabbed both of them straight up in the air and resumed the spanking. “ As punishment, Rosie ended up deprived of breakfast that morning.

Further, when she was around five years old, she witnessed the “brutal, strict, evil-reincarnated dorm mother, Sister Renata who ran the Home like a Nazi and her demented viciousness.”  There was one girl who wouldn’t eat her vegetables but was commanded to do so. On the fourth bite, the girl vomited all of it onto her plate and Sister Renata pushed the girl’s face close to the plate and told her to eat all of the mess and that she better not see any morsel left on the plate. The girl slowly picked up a heaping spoonful of her vomit and swallowed it! Sister Renata looked around the room like General Patton after reprimanding the troops and then walked away.”

Another significant scene she recalled was when she was around seven or eight years old and on a visit at her mom Lydia’s  “over decorated to the nines – very seventies, hip and tacky” house. “There was this glass coffee table shaped like an hourglass that captured my attention. I thought it was cool-looking, I smothered my hand across it, admiring its slickness. “Don’t touch!” my mother yelled so loudly that my hand jumped up and my elbow crashed onto the glass coffee table, shuttering it. She grabbed me by my arm so hard that I thought she was going to rip it off . I yelped in pain. So, I went upstairs, and my oldest half-brother was lying under the covers on my mother and stepfather’s bed watching television. Her brother asked her to watch TV with him but there he was naked, so she went to the bathroom and stayed there until one of her half-sisters came in.”

It is remarkable how a brave but gifted, artistically talented lady has survived all the abuse she has experienced and chronicled, yet in the end, she has accepted everything with grace and forgiveness, which enabled her to move on, thus giving her the freedom to show the world that anything is possible with one’s “intense determination” to succeed in life.

Most recently, after a year with a daily TV talk show, Rosie has announced that she will be leaving “The View” but surely, with her artistic prowess, the viewing public will more than likely see her shine again on stage or on screen sometime soon. ‘Yo, Wosie…more power to you!”

Embassy hosts forum on addressing violence against women and children

Cayetano to Napoles: Your money can get you a lawyer